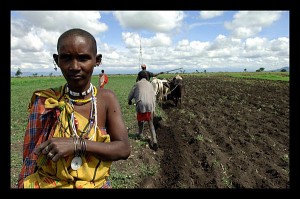 Just over a year ago, President Obama announced the launch of the New Alliance for Food Security and Nutrition, a joint commitment by the G8 nations, African countries and private sector partners. This week, a reflection over the last year celebrated the remarkable progress that has been made by the alliance in farming communities in Africa.

The initiative, launched on the eve of the G8 summit last in 2012, aims to lift 50 million people out of poverty by 2022 by implanting inclusive and sustained agricultural growth. In a speech last week, USAID Administrator Rajiv Shah said, “In one year, the New Alliance has grown into a $3.75 billion public-private partnership that embodies the principles of Grow Africa, an African-owned and led platform for catalyzing reform and mobilizing private investment.”

Over the last year, the alliance has provided support to six African countries in order for them to facilitate trade, stimulate new markets, and create new jobs. Techniques such as expanding seed production and distribution, and developing infrastructure, have helped spur agricultural growth, and have aided smallholder farmers with increased access to commercial markets. In 2013 alone, three new programs have been launched; the Agricultural Fast Track Fund, the Open Data for Agriculture, and a Technology Platform that will assess the availability of improved agricultural technologies for farmers in developing countries.

Food security and nutrition is vital in these farming communities; as Administrator Shah remarked in her speech, “long-tern food security is defined not only crop yields and vibrant markets, but also by the health of a child and the resilience of her community.” Although there are still many issues facing farmers in African countries, the New Alliance remains positive about the future. “By introducing innovation across the entire continuum from farm to market to table,” Shah said, “we have the opportunity to tackle extreme poverty by the roots and shape a world with far more partners in trade than recipients in aid.”