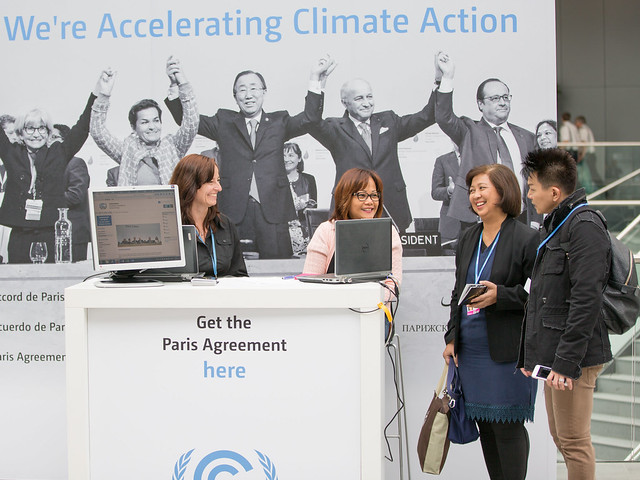 The United States and China, the two biggest global carbon-emitting countries, have ratified the Paris Climate Change Agreement. On Sep. 3, 2016 both U.S. President Barack Obama and Chinese President Xi Jinping submitted their plans to the United Nations Secretary-General Ban Ki-moon. The ratification was announced in advance of the Group of 20 (G20) meeting being held in Hangzhou, China.

The U.N. Framework Convention on Climate Change (UNFCCC) in Paris was signed and adopted by 195 parties in December 2015. It asks the nations “to combat climate change and to accelerate and intensify the actions and investments needed for a sustainable low-carbon future.” This agreement has come to be known as the Paris Agreement.

The UNFCCC in December 2015 saw a global compact to slash greenhouse gases and keep global temperature increases below 2 degrees Celsius. However, with the U.N.’s weather agency reporting that 2016 is on course to be the warmest year on record since records have been kept; it is already being questioned whether this goal can be reached. With the U.S. and China ratifying their agreements, and the U.N. Climate week in late September, a surge of ratifications is hoped for and expected.

U.N. Chief Ban said in a ceremony for the two countries: “With China and the United States making this historic step, we now have 26 countries who have ratified and 39% of global emissions accounted for…” It is hoped that with these two countries leading the way, more countries will follow suit. For the agreement to take effect, 29 more countries, which represent 16% of worldwide emissions, need to ratify their agreements. Once 55 countries that account for 55% of the greenhouse gases emitted have signed ratifications and filed them with the U.N., the agreement will go into force within 30 days.

The four countries with the highest emissions are China with 20.09%, the U.S. with 17.9%, Russia with 7.5% and India with 4.1%. The signing of the agreement was convened by U.N. Chief Ban in New York in April 2016. Country representatives signed the agreement before ratification. Once a country has signed the Paris Agreement, “it is obliged to refrain from acts that would defeat its object and purpose. The next step, ratification, signifies a country’s intent to be legally bound to the terms of the treaty at the international level.”

Before China and the U.S. ratified the Paris Agreement, only 24 other countries had done so and their emission impact on the globe represented only one percent. Now that these two large countries and large carbon emitters have ratified their agreements with the U.N., there is a bigger likelihood that the Paris Agreement will be set into place before the end of the year which is when it was expected. The agreement may even be enacted before November’s U.N. Climate Summit in Marrakesh.