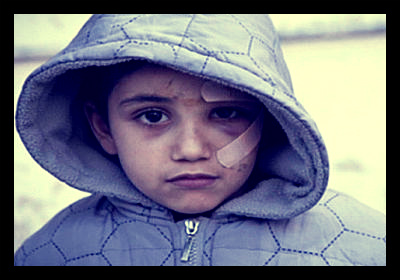 Every day Syria’s people live in unending stress caused by the conflict. This frenetic climate is especially traumatic for children, who are exhibiting signs of psychological damage.

Children need stability in order to develop into emotionally stable adults, so a bombardment of unpredictable stressors that occur in the early stages of development can have lasting repercussions. Many children in Syria have witnessed horrific violence, and many have lost their parents, friends, and family to the war. Many children have been forced to flee their homes again and again, and live with the daily insecurity of not knowing if they will be protected, taken care of, or have enough to eat.

Traumatic events impact children far more severely than adults. The effects of abuse, natural disasters, or war shape the child’s brain as it is developing, causing lasting changes in the way traumatized children will function, feel emotions, understand their world, and interact with others throughout their lives. Parents of children in Syria are reporting unsettling signs of severe anxiety, like frequent nightmares and bedwetting. These children are also growing more aggressive and reckless, or withdrawn and clingy. This is because repeated threats of violence trigger a fight-or-flight response in the brain that may never be turned off for young children. Their overwhelming grief is also apparent in their drawings, which depict scenes of destruction and blood.

The deep and lasting psychological trauma of war is leaving invisible scars on over 4 million children impacted by the conflict in Syria, according to UNICEF. But there is hope, since the child’s mind is still growing, they are more resilient than adults. UNICEF has been working with children and parents displaced by the conflict, to help them express their difficult emotions through constructive outlets, and to give them a sense of security by simply being there to help them. They are also training teachers to be supportive and to notice when children need specialized care, and providing safe spaces designated for children to play, an important activity for social development. This kind of care has reached 470,000 children in Syria this year, and UNICEF is appealing for more funding for the program. “Helping children deal with fears and insecurity is not a luxury,” said Maria Calivis. “Parents who see their children reconnecting with their childhood have become our best advocates for this service.”

How Global Citizen Festival is Changing the World Forgotten Victims of Syria: People With Disabilities
Scroll to top