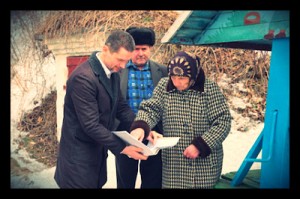 Ivan Kalyta, a Ukrainian citizen, wanted to sell some of his land to raise the money to fix his home. When he discovered he would have to pay more than $500 in administrative fees to sell the land, he was quickly discouraged. Not only was Ivan not able to pay the fees, but he had no idea where to obtain the documents and legal aid necessary to sell his land.

To tackle the problem, UNDP advised Ukraine to adopt free legal aid services, which they did in 2011. According to a poll conducted by the Ukrainian Union of Lawyers, more than 24 percent of the population in Ukraine seeks free legal advice.

The project also reaches out to the people who live in rural areas. Since most free legal aid centers are located in towns and cities, UNDP has funded a program that provides online and Skype consultations. The program runs through local libraries, and anyone needing help in a rural area need only go to the nearest library. This is what Ivan did and the program has helped him tremendously.

“The money I got from selling part of my land came in very handy,” says Ivan. “My roof is not leaking anymore. I also was able to put some money aside for medication. Life is so expensive here, I am glad it worked out.”