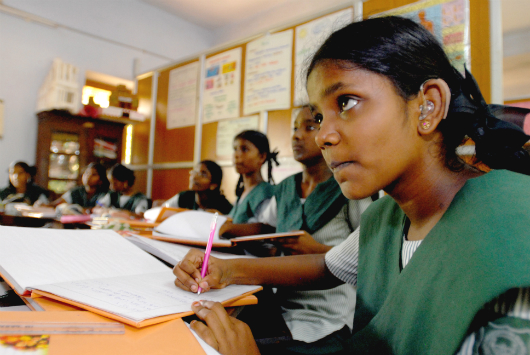 As part of the charter, the United Nations was created to help world development among many other ideas.

In 2000, the UN released the Millennium Goals, a set of goals to eradicate poverty by 2015. For education, the goal was to achieve universal primary education. The same year, the UN also announced the Education for All goals, which includes objectives like creating gender and ethnic equality for accessing education, increasing adult literacy, and improving the quality of education offered.

When the 2015 year began, the UN reevaluated these measures and how they have been successful. Primary education has reached 90 percent of the youth; however, 58 million children still remain out of school with about half of them being young girls. These children are either working, forced to marry, are slaves or are child soldiers.

Set backs in education such as natural disasters, wars or extremist that threaten stability can keep young children out of school and make aid accessibility for the children difficult. Other issues arise as well. Teachers are not trained correctly. There are not enough textbooks. Student to teacher ratios can be 146 to one in some cases. With issues like these, it is a struggle to provide each child with a quality, basic education. It is estimated that about 250 million children fall into this category.

The Post-2015 Development Agenda was created to address the education goals not reached by 2015. The new set of goals focuses on girls, children of ethnic minorities and disabled children.

In addition, it addresses how to finance the new projects. One dollar invested equals a $15 economic gain, and if all children had basic reading skills, then 170 million people would be raised out of poverty. The plan is to increase public investment in education by 4 to 6 percent of the each country’s GDP in hopes of reaching that 170 million people.

The UN encourages governments to work together and create agendas that promote transparency and collaboration. It also hopes that the UN organization for education, UNESCO, will continue to be a leader in educating the world’s poor.