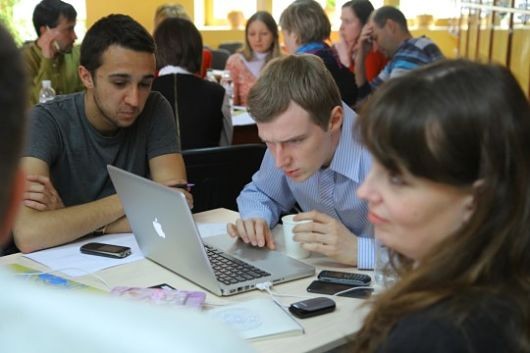 This February, SocialBoost partnered with USAID in Kyiv, Ukraine to host a hackathon in order to generate innovative ideas on delivering services to internally displaced people.

Since February, the number of internally displaces people in Ukraine has reached over 1.2 million because of violence in the Donetsk region. The Ukrainian government supports the internally displaced people; but their methods are inefficient, so they looked towards the young, bright innovators for a better solution.

SocialBoost is a tech nonprofit that promotes Ukraine’s open data law, a newly adopted law that stimulates the startup business environment through free and accessible data, democratic power in taking on problems like corruption, decision-making and public service. With this, SocialBoost hosts hackathons to support socially meaningful IT projects. In this case, it’s how to deliver services to 1.2 million internally displaced people.

Because of the open data laws, all data is at the hacker’s fingertips as they try to create a prototype to help Ukraine’s government. “In Ukraine, the IT community is strong and patriotic,” says SocialBoost founder Denis Gursky. Ukraine’s IT sector is influential to the economy and has been vital in bringing about political change.

Before the hackathon, SocialBoost created a multimedia campaign that allowed people to share their prototype ideas and publicly vote on their favorites. The top ten finalists competed in the Ukrainian hackathon. After two days, the finalists presented their prototypes to the judges, who voted based on five criteria: reach, potential impact, sustainability, technical components and teamwork.

The winning prototype was LifeTag, an SMS service that navigates internally displaced people to the nearest government or volunteer station based on their needs, which can be selected from a drop-down menu. LifeTag was developed by a team of university students.

Jonathan Katz, USAID’s deputy assistant administrator for Europe and Eurasia presented the award to LifeTag at the end of the Ukrainian hackathon and concluded with an air of hope, saying, “It really gives me confidence that despite all the challenges, these young people will work tirelessly to ensure a brighter future for the people of Ukraine.”