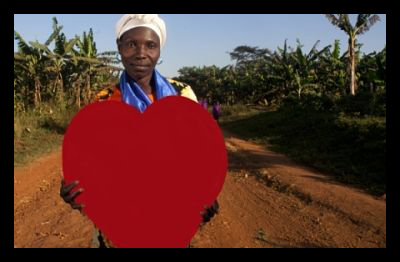 “I want to be a designer … I want to be a lifeguard … a pilot … a journalist … a president! … I just want to dance.” These were just a few of the phrases on the signs that were held up in a recent lip dub video, featuring 500 Ugandan women, all of whom have started small businesses in their local communities. Working with SYPO Uganda Ltd, a Dutch non-governmental organization that provides micro-loans, the women choreographed a lip dubbed dance to Jessie J.’s famous song, “Price Tag,” in order to show the world that they want the same things as everyone else, and not just survival.

Over the past couple decades, Uganda has reduced poverty from 56 percent in 1992 to 24.5 percent in 2009. However, the majority of those who fall below the poverty line live in the countryside where access to education, services and better jobs are much more limited.

That’s where SYPO Uganda Ltd., stepped in. The organization began working with Ugandan partners in 2009 to support entrepreneurial projects of rural women in Uganda. Providing microfinance loans through local partners in transparent and effective ways led to great levels of success among recipients. To date, the organization has provided over 1,500 loans and maintained a 99 percent repayment rate.

The loans can be used in any way that the women want and are repaid with interest, ensuring that there is no third party influencing how the money is used or leaving any unwanted feeling that it is just another Western handout. The loan allows Ugandan women to be able to create and sustain a livelihood for themselves and their families.

In the final moments of the lip dub video, a message flashes up, reminding those watching that these women are proud to be able to work for themselves and build a life for their family and community. Empowerment is the best form of international aid. “We Africans want the same things that you want – survival is not enough. But we’re not asking for handouts. Instead we are asking for loans to start our own businesses. Help us grow. Go to Microbanker.com to support our business ideas!” the women said.