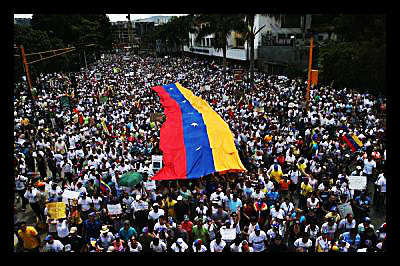 On March 4, in a simple resolution, an overwhelming majority in the United States House of Representatives agreed to support the people of Venezuela as they protest peacefully for democratic change and call for an end to the escalating violence in the South American country.

The resolution comes on the eve of the one-year anniversary of the passing of Hugo Chavez, who succumbed to cancer after 14 years as the president of Venezuela. Nicolas Maduro took over leadership and has carried on the Chavez legacy with state-controlled economic policies that are now under criticism by anti-government demonstrations. At least 18 people have been killed since the protests began in early February.

The buildup towards the recent student-led protests came from hyperinflation, a shortage of basics, spiraling murder rates and a general decline in living standards. Presently, Venezuelans cannot get basics such as toilet paper, rice, coffee and corn flour. Last year, almost 25,000 homicides took place in the country. Protesters claim that the government is corrupt, undemocratic and is ruining the economy.

On February 12, Venezuela’s National Youth Day, students led a peaceful anti-government protest. The Venezuelan military responded with gas bombs and guns to control the crowds. Leopoldo Lopez, leader of the opposition party Voluntad Popular, was arrested later in the month and is currently being held in a military prison. Amnesty International states that the arrest of Lopez is a politically motivated attempt to silence dissent in the country.

The Venezuelan government has implemented a number of policies in reaction to the protests. It declared three consular officers at the U.S. Embassy in Venezuela personae non gratae, or un-welcomed, adding to eight other American officials who were expelled in 2013. The Venezuelan government has also taken control of television, radio and the internet. It blocked online images of the marchers, shut down Twitter, has taken Colombian news channel NTN 24 off the air and threatens to expel CNN.

The House Representatives agreed that the U.S. Government should support the free and peaceful exercise of representative democracy in Venezuela, condemning violence and intimidation against the country’s political opposition, and calling for dialogue between all political actors in the country.

The House resolution just passed urges the international community to stand in solidarity with the people of Venezuela and to actively encourage a process of dialogue between the government of Venezuela and the political opposition to end the violence there. It also believes that the Organization of American States should respond to the erosion of democratic norms and institutions in member states.

Additionally, it deems that the U.S. Department of State should work in concert with other countries in the Americas to take meaningful steps to ensure that basic fundamental freedoms in Venezuela are in accordance with the Inter-American Democratic Charter. Lastly, The Inter-American Commission on Human Rights demanded that the Venezuelan Government adopt measures which guarantee the rights to life such as humane treatment, security, political rights, the right of assembly, and the rights of freedom of association and freedom of expression.

Same-Sex Marriage Laws Around the WorldEducation in Afghanistan: Key to Stability
Scroll to top