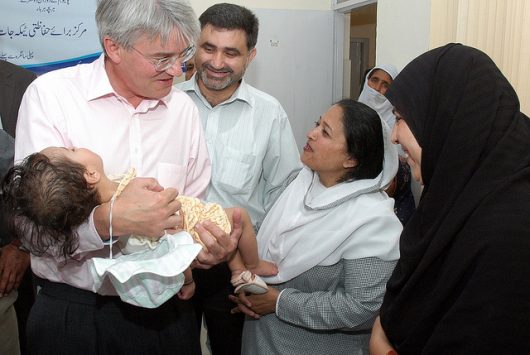 Doctors are working to find a solution to a typhoid fever outbreak in Pakistan, as this new strain has become highly drug-resistant. The new strain of typhoid was detected in Hyderabad, Pakistan, in 2016 and is slowly being transmitted throughout the country. There are approximately 21 million cases of typhoid worldwide and 220,000 deaths annually. It is estimated that about 800 people have become infected with the new strain of typhoid and four have died. This particular strain or “superbug” is now resistant to five types of antibiotics, due to having acquired an extra strand of DNA.

Typhoid fever, which can be fatal, is a bacterial infection characterized by stomach pain, headaches, constipation or diarrhea and fever. Typhoid is highly contagious and is typically contracted through food and drink, especially contaminated water. This is most common in areas with poor methods of waste disposal and sanitation. Salmonella typhi, the bacteria connected to the typhoid infection, thrives in an overpopulated environment. It is believed that the origin of the typhoid fever outbreak in Pakistan started with water sources in Hyderabad that are being polluted by leaking sewage pipes.

This drug-resistant infection is not an isolated occurrence. Doctors prescribe around 50 million doses of antibiotics every year for typhoid. Because of the frequent use of antibiotics in medicine and farming, bacteria continue to mutate and adapt to drugs.

Public health officials and experts are imploring citizens in affected areas to boil water, practice good hygiene, avoid raw foods and receive the vaccination. In the future, the sanitation infrastructure will need to be revamped. Although two vaccines have been used in the past to prevent typhoid, the WHO has recommended a new vaccine with longer-lasting immunity in an effort to control the typhoid fever outbreak in Pakistan and other countries with a high number of infected people.

It requires fewer doses than the previous two and can be administered to children starting at the age of 6 months, which can reduce the use of antibiotics and slow antibiotic resistance. The Sindh health department has already begun distributing the vaccine in Hyderabad as part of an emergency inoculation campaign. The goal is to vaccinate 250,000 children in the area using the vaccine, called Typbar-TCV.

There has been a small pushback on the vaccination campaign from members of the community who fear Western infiltration, as many citizens believe that the vaccines have been poisoned. This is most likely a reaction to when a supposed hepatitis B campaign gathered information before the 2011 raid that killed Osama bin Laden.

The vaccine has received the support of GAVI, The Vaccine Alliance, in the form of $85 million to ensure the vaccines get to people in need in developing nations. It will become routine in immunization programs in 2019. It is a key part of the effort to end the typhoid fever outbreak in Pakistan and reduce the number of future outbreaks worldwide.