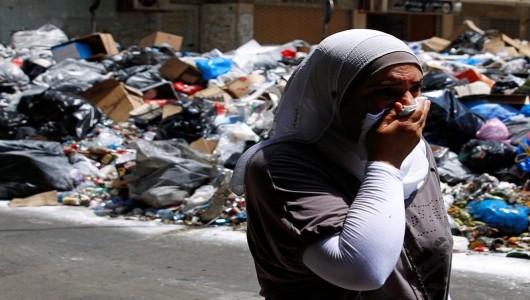 In early Aug. 2015, protesters stood outside Beirut’s government building demanding that officials deal with the thousand tons of trash piling up on the city’s streets. The most frustrated of the crowd accused the government of acting like a regime, ignoring the city’s demands for change.

Beirut’s former public landfill was based in the village of Naameh. It opened in 1997 and was only built to withstand a few years and about two million tons of rubbish. After 18 years and 10 million tons of trash, Beirut officials shut down Naameh.

The current issue is because the government failed to build a new one. “Everyone knew for the last six months that the landfill would close, but the government did nothing about it,” says one resident. With nowhere to dump it, trash collection for Beirut and its suburbs just stopped.

The city and its surrounding neighborhood generate 2,000 to 3,000 tons of trash each day and it is now cumulating into mounds on the streets. Many people have started wearing face masks. Others are setting fire to the filth, creating pillars of foul smoke and causing temperatures to climb above 90 degrees.

Lebanon rules with a very laissez-faire attitude. In lieu of recent unrest in the Middle East and problems within the country, the government has been unable to elect a new president and remains without a political figurehead that can pass legislation and finalize laws.

The Cabinet is reportedly near collapsing. Terms in office are being extended and elections for new leaders are put off. “The political deadlock is a huge contributing factor to the issue because there is no strong central government who can look at the options and find the most feasible one,” speculates Lama Bashour, director of an environmental consultancy agency called Eccocentra.

Residents claim that the government’s latest decisions have been undemocratic and unconstitutional, and have just exacerbated the country’s problems. “I’m angry, not just this, but at the general dysfunction of the country,” explains one of the city’s entrepreneurs. Some speculate that only radical actions could push the government to rule more effectively. All of the frustration and outrage surrounding this latest trash issue might be enough.

Some trash in rural areas has been removed but people report that it was just dumped somewhere else nearby. Sahar Atrache is an analyst that works for the International Crisis Group. She says that this half-hearted attempt is characteristic of Lebanon’s current government.

It is true that Lebanon’s resources and political power have been strained lately with the 1.3 million refugees estimated to pour into the country as a result of the Syrian crisis. The ICG recently published a report called Lebanon’s Self-Defeating Survival Strategies that explains, “Lebanon is surviving internal and regional strains remarkably well, but this resilience has become an excuse for tolerating political dysfunction.”

The city has been trying to deal with the matter on its own and has been starting to compost and recycle to keep waste build-up down. Some residents have begun their own local trash-pick up service.