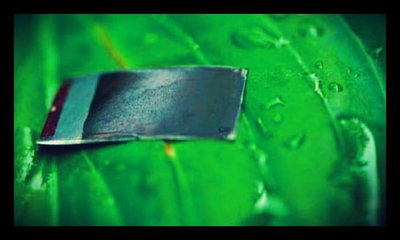 For roughly three billion of the world’s population, access to traditional forms of energy is a luxury afforded to a privileged few. However, increased scientific research focused on finding “personalized” forms of energy production aimed at alleviating energy constraints in remote populations has resulted in amazing technological breakthroughs. Of these exciting new innovations, none has more potential in global poverty reduction than that of the artificial leaf and development.

Made of little more than a thin piece of silicone, the artificial leaf is coated with a self-healing substance that is able to produce a chemical reaction under certain conditions. The artificial leaf is able to utilize water and sunlight – not unlike the photosynthetic reactions of a real leaf – to produce enough energy to power a 100-watt light bulb for up to 24 hours. Furthermore, the artificial leaf has the unique ability to use dirty water as a means of energy production, a benefit considered instrumental in rural areas with little available drinking water. In regards to the artificial leaf and development, Harvard professor Daniel G. Nocera remarked that “They are a kind of ‘living catalyst.’ This is an important innovation that eases one of the concerns about the initial use of the leaf in developing countries and other remote areas.”

Scientific breakthroughs that open up exciting new energy possibilities such as artificial leaf and development are a reason to be optimistic in the fight against global poverty. In regards to the energy benefits of the artificial leaf, Nocera stated that “We’re interested in making lots of inexpensive units that may not be the most efficient, but that gets the job done. It’s kind of like going from huge mainframe computers to a personal laptop. This is personalized energy.”