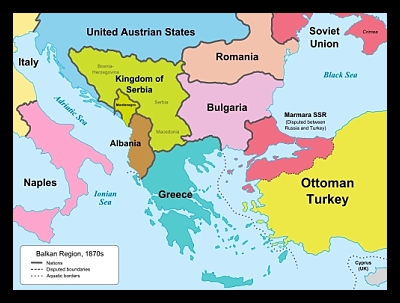 The Balkans refers to a geographic region that lies on the Balkan peninsula. The modern day Balkan states are Albania, Bosnia and Herzegovina, Bulgaria, Croatia, Greece, Macedonia, Romania, Slovenia, Serbia and Montenegro, and a small part of Turkey. Comparatively small as a region, Winston Churchill once remarked, “The Balkans generates more history than it can locally consume.” Though small and not as economically powerful as its giant neighbors, the countries of the historically volatile region have indeed been a source of conflict that has dramatically changed the world stage on more than one occasion.

The Balkan wars themselves were two wars spanning 1912- 1913; the first, between the allied Balkan League (Serbia, Greece, Bulgaria and Montenegro) and the Ottoman Empire then the second between Bulgaria and its former allies. The wars are seen as precursors to World War I, and have regained interest in a time when nationalist conflicts, fueled by the agendas of larger countries, have caused violence which has sparked more violence. Time writer Ishan Tharoor compared the Balkan wars to today’s Syria and Democratic Republic of the Congo, reiterating that an intensely violent national conflict can only lead to greater, bloodier violence in the long term, if left uncontrolled. Though comparatively short, the Balkan wars have been noted for their intensity and horror. Descriptions of the battles foreshadow the later unmatched horror of World War 1. One journalist compared scenes from the battles to Dante’s descriptions of hell.

In the first Balkan war, the Balkan League united against Turkey. Having previously been quite powerful, at the time, Turkey controlled significantly more land. Yet it had recently been defeated by Italy and was clearly waning in power. Turkish defences quickly crumbled against the combined forces of Serbia, Greece, Bulgaria and Montenegro. This concluded the first Balkan war.

Afterwards, Bulgaria became dissatisfied with the division of the lands claimed from the first war. It subsequently attacked Greek and Serbian forces in an attempt to assert military power, which quickly escalated into the second Balkan war. Outnumbered, Bulgaria made peace with the neighboring states in 1913. Yet bitter wounds and rivalries remained, and a left a legacy of overzealous nationalist pride which would not easily be mended.

The Balkan wars were only a century ago, yet the lessons learned of the dangers of pure nationalist interest and the unforeseen consequences of greater powers using conflicts to spur their own agendas are going tragically unheeded.