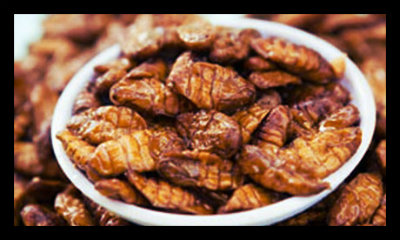 According to the United Nations’ Food and Agriculture Organization (FAO), eating more bugs could bring an end to world hunger. The FAO’s report states that over 2 billion people in the world already eat bugs as part of their everyday diet because they provide a mountain of health benefits, including protein, minerals, calcium, copper, iron, magnesium, manganese, phosphorus, selenium and zinc, and fiber.

Other benefits of eating insects are that they produce fewer greenhouse gases, they feed on human and animal waste, they reproduce quickly, and they are everywhere. Increased demand for insects can also increase demand for insect farmers, which can promote more farming jobs around the world.

Some of the most common edible bugs are beetles, caterpillars, bees, wasps, ants, grasshoppers, locusts, crickets, cicadas, leaf and planthoppers, scale insects and true bugs, termites, dragonflies and flies. The FAO’s Edible Insect Program is also researching the edibility and nutrition of arachnids, such as spiders and scorpions.

Although it may not sound too appealing to chow down on a plate full of wasps, locusts, termites, and flies, eating insects has the potential to decrease world hunger, which is always appealing.