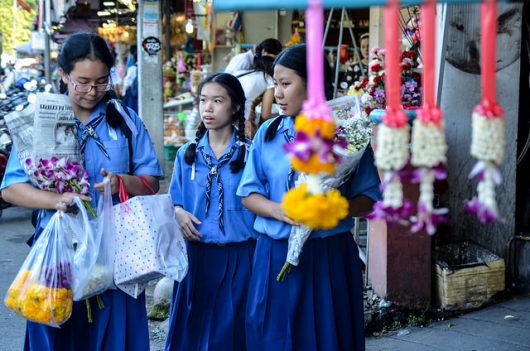 In recent years, Thailand has made tremendous strides in pulling itself out of poverty. In 2011, Thailand became classified as an upper middle-income economy as the Thailand poverty rate has been steadily falling since the 1980s.

In 2015, according to the World Bank, the Thailand poverty rate was 7.2 percent, a tremendous change from 67 percent in 1986. While the Asian Development Bank reported a slightly higher poverty rate of 10.5 percent, the decrease in poverty in Thailand is undeniable. In comparison to the rest of Southeast Asia, Thailand boasts the third-lowest poverty rate right behind Malaysia and Vietnam.

However, poverty in Thailand tends to concentrate in two main groups: those living in rural areas and the elderly. Of the roughly 7-10 percent that live in poverty, a majority of those live outside of metropolitan areas. As of 2014, more than 80 percent of those living below the poverty line resided in rural towns.

Many point to significant economic growth as a catalyst to Thailand’s falling poverty rate. Thailand’s economy has been steadily growing since the 1960s, creating jobs that have helped millions escape from poverty. Although growth has slowed down slightly, the World Bank expects it to pick up once again in 2017.

As a result of economic growth, many have experienced improvements in welfare. Many Thai children have had their quality of life improved. Literacy rates have increased while the rate of childhood death and disease have decreased. Most people are covered by health insurance and social security has increased as well.

This is not to say that poverty is no longer an issue within Thailand. Many still live without access to basic social services and the poor continue to be more vulnerable to illness and unemployment. However, it is important to understand the Thailand poverty rate — and how it has fallen dramatically — in order for the country to continue its trend away from poverty.