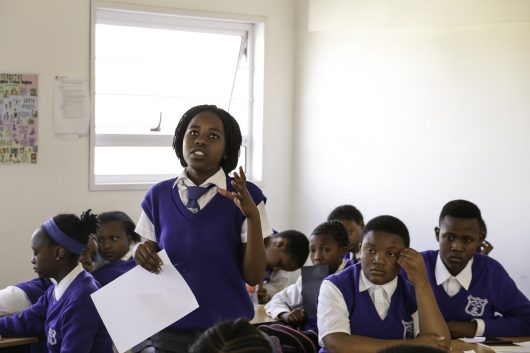 South Africa has made huge strides for fostering a more egalitarian society through addressing gender-based violence and combating gender stereotypes. An initiative called Techno Girls has offered up its hand in minimizing gender gaps, addressing the gender disparities head-on in the educational and career sector.

The program provides opportunities for girls who prove academic merit between the ages of 15 and 18, and who come from disadvantaged communities to begin exploring career avenues in traditionally under-represented sectors — math, science, technology and engineering.

According to Statistics South Africa, in 2012, the percentage of women in non-agricultural employment increased slightly from 43 percent in 1996 to 45 percent.

Although gender equality has improved over the years, more work needs to be done to balance out gender ratios within STEM subject matter and career sectors. Girls are often discouraged from pursuing a career in engineering or science and Techno Girls is working to change that.

For instance, Techno Girls provides mentorship, shadowing experiences and skills development initiatives where girls can gain insights and leadership skills in the public and private sectors.

As of 2016, over 5000 girls have benefited from the program and have moved on to receive university or college scholarships. The Techno Girls Alumni Program also provides support to ensure a higher completion rate at tertiary level schooling, and in securing job opportunities in their chosen fields of study.

Minister of Women, Children and People with Disabilities, Lulu Xingwana, said that she wanted Techno Girls to run the economy to show that, “the struggle by women in 1956 was not in vain.”

With the program’s success and popularity, the Ministry for Women, Children and People with Disabilities identified Techno Girls as a key government program in furthering goals for gender equity.

Moreover, Techno Girls has been expanded to all nine provinces of South Africa. Women’s empowerment and potential in STEM sectors are on its way in South Africa.