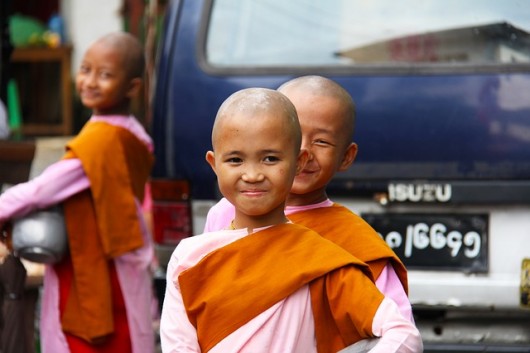 Reading about the conditions people around the world live in and hearing about their hardships simply cannot compare to a full immersion in the culture of another country.

Corbin Dickson, who was born and raised in Colorado, is currently teaching in Myanmar at the Myanmar International School in Yangon, Myanmar. He offered some insight into his experiences abroad in Myanmar (known previously as Burma.)

When asked about the impact he thinks education has on poverty levels, he says that it’s hard to say. Often, the only families who can afford an education are already wealthy, he says.

But he does mention the correlation between rapid economic development and the introduction of new schools. He is confident that new institutions, such as the one he teaches at, will ultimately have a positive effect on individuals, “especially since they are far more equipped to prepare and inspire students towards higher education abroad.”

Although the school he teaches at is attended primarily by upper-middle class or wealthy students, conditions are different than in the United States.

He says only one-third of Myanmar residents have access to electricity, and that even though Yangon is an urban area, the power frequently goes out. (To him, the inconvenience of constantly interrupted lessons is something he’s grown used to, though the lack of air conditioning and fans, while it’s usually above 80° F with high humidity is admittedly not.)

And the poorer areas are never far away, he says. “You don’t have to travel far out of Yangon to get to a rural area. Once out in the rural areas, it feels as though you have gone back in time 100 years; farmers still plowing their fields with buffalo, people still living in homes made of woven palm leaves and bamboo.”

Perhaps these people prefer the simplicity of a life lived off the land, rather than the complications of bustling urban life. Dickson says the lack of basic framework can be frustrating, as can the Internet speed (“as slow as dial-up in the early 2000s”), and traffic.

Dickson noted that “Yangon simply doesn’t have the road capacity to handle the influx of cars” that people purchased when the country began opening up in 2011-2012.

One of the biggest cultural differences that Dickson discussed was an obsession with not standing out or making anyone else look bad, what he calls, “saving face.”

“For example,” he says, “if you ask a taxi to take you somewhere and the driver doesn’t know how to get there, they will try to take you anyway, driving around, guessing until they make it. When [me] or my friends try to direct them, they pretend not to hear or act as though their way is better (or worse, say we originally told them something else).”

Dickson says it can be difficult to teach when students are so reluctant to ask questions, and it’s strange to get used to adults who refuse to ask for clarification on something they don’t understand.

With modern life comes all of these little cultural quirks and frustrations, like the sound of honking cars, and worrying about looking bad in front of other people. But one of the things that stands out about Myanmar the most is simply the way that its residents view poverty.

Dickson says that because there is no financial or social support offered by the state, the highly empathetic population takes personal responsibility to help those who need it.

“Despite living close to poverty themselves, Myanmar people dedicate a lot of time and money to helping those in need when they can,” he says.

One of the teacher’s assistants at his school spends her weekends teaching for free at a poor rural school. When there was flooding occurring, students took part in huge fundraising efforts, and many went to offer firsthand aid in the crisis areas.

“The major difference here in Myanmar to the U.S. is that people in Myanmar don’t look down on the poor,” Dickson says. “People simply make no judgments towards the life conditions of others – no accusations of fault or blame for one’s situation.”

And what an inspiring outlook that is. These are people who live in the midst of poverty themselves. People who, by U.S. standards, are suffering from a lack of electricity and basic infrastructure. Yet they are willing to offer a helping hand to anyone who needs it.