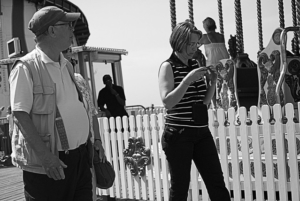 Chew Jetty is a small town in Malaysia’s George Town that achieved Unesco World Heritage status in 2008. On Penang Island, the town contains wooden piers that used to belong to a bustling seafront hub and represents the vitality and dynamic nature of one of the last intact bastions of Malaysia’s old Chinese settlements. After World War II and Japanese occupation, the piers decayed immensely until the settlement’s economy was hardly able to sustain itself. In a final attempt to preserve the economy and the once-vivacious settlement, the town made a bid to Unesco for protection.

When Chew Jetty was awarded World Heritage status, the change was not at all what the residents had expected. Two of the clan enclaves had been demolished to create new housing complexes. Additionally, flocks of tourists infiltrated historical homes, vendors installed flashy commercial stalls and encroaching developers urged locals to alter important structures to make room for new developments. Suddenly, Chew Jetty’s status as a Unesco World Heritage site attracted thousands of tourists by the boatload, effectively uprooting the culture and traditions once held sacred to the old Chinese settlement.

And yet, receiving its status as a World Heritage site seemed to be the only measure of action that prompted Chew Jetty out of its declining economic state. Therein lies the dichotomy in in Unesco’s attempt to benefit economies and its detrimental effect on the local population.

This anti-tourism sentiment can be seen worldwide. In 2017, local communities in Venice and Barcelona gathered together in an outburst of anti-tourism marches, complaining about rising rents, overcrowding, and the increase in pollution due to cruise ships. Local residents and activists are demanding authorities to alter the management of tourism, as it has significantly altered their normal daily lives and actually increased the cost of living for them.

At first glance, the influx of tourists is interpreted as an increase in the tourist economy and consequently an increase in the state economy. However, upon a further breakdown of this effect on the locals of any given city, the influx of tourists increase costs and overcrowding, making living conditions more difficult and less affordable for local residents. This could, in turn, actually increase poverty rates among the citizens who once inhabited these locations.

There are 1,052 World Heritage sites across the world, and most of these locations struggle with the same conflict of striking a balance between tourism and the preservation of culture. Several organizations, including Unesco itself, have been working towards a solution to this problem. The World Tourism Organization (UNWTO) has stated that the goal should not be to limit the number of tourists visiting these cities, but rather to better manage the flow of tourism by perhaps redirecting them away from main city centers and city attractions and formulating a more sustainable form of tourism.

While there are negative socio-cultural and economic effects on World Heritage sites, there are several movements that are working together to bring a more sustainable form of tourism and enhancement of a city’s economy without sacrificing the well-being of the locals.

The United Nations Foundation is a partner of the United Nations, though it is not directly involved in achieving the UN’s goals on the ground. It was started after multimillionaire philanthropist Ted Turner donated $1 billion as a show of his support for the UN’s objectives. Primarily a funding body, the foundation was established in 1998 –- long after the UN’s 1945 inauguration –- to ensure governments adhere to the commitments they have made to the UN and to secure funding for UN projects worldwide. Additionally, the UN foundation works to connect other organizations, individuals, and businesses in partnership with the UN.

The UN Foundation recognizes the role enterprise has to play in development. Accordingly, it has formed 300 partnerships and garnered over $2 billion in direct aid for UN projects. Examples of the Foundation’s work include partnerships with Vodafone to assist in capitalizing on the spread of technology as an aid to development efforts, with Expedia to protect and increase education about World Heritage Sites, and with multiple US corporations, such as Orkin, Hewlett-Packard and United Airlines, to support the Nothing but Nets campaign which provides mosquito nets in malaria prone regions.

The UN Foundation’s work is particularly important as one of the notorious pitfalls of development projects is the disconnect among organizations working on the same issue. The approach of disparate entities working separately on the same issue breeds inefficiency. Without coordinating past and current efforts, institutions often use the same flawed approaches, compete for resources, and waste energy on unnecessary projects. The Foundation’s work streamlines efforts, capabilities and resources to create a single, coordinated powerhouse initiative on a given project, which has the potential to produce far better results.

Though the UN Foundation is not itself an intervening body, its services have proven invaluable to the continuing efforts of the United Nations in alleviating poverty and instituting programs for sustainable development worldwide.