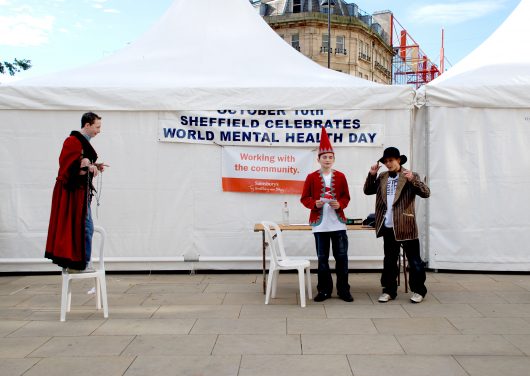 In other words, it is an opportunity for practitioners, scholars and everyday citizens alike to share their successes in the field of mental health and discuss what still must be done.

What was this year’s theme?

A yearly theme is set by the World Federation of Mental Health (WFMH). The theme for 2017 was mental health in the workplace. According to the WFMH, mental health issues lead to increased rates of employee absenteeism, lower rates of productivity and increased costs to businesses.

Potential solutions involve raising awareness to reduce the stigma, appreciating employees and fostering a supportive environment that is mental health-friendly. Further, individuals should remain aware and be able to identify signs of undue stress and burn-out, so they can be addressed by stress management programs.

How does mental health relate to poverty?

People who live in poverty are at a higher risk for a variety of mental illnesses. Further, people living in poverty often face mental illnesses that are more severe, last longer and have overall worse outcomes. Conflict and violence can further exacerbate mental illnesses, in particular anxiety, depression and post-traumatic stress disorder (PTSD). An overwhelming majority of people in such situations are living in poor physical health and are subject to human rights violation.

The prevalence of mental illness cannot be considered without other areas of development, including education, employment, responses to emergencies and/or natural disasters, etc. These are all issues that are also intrinsically linked to poverty.

The psychological burden of poverty, which includes anxiety and stress, and of witnessing trauma or violence is the main contributing factor to mental illness for those living in poverty. The long-term mental health effects of poverty are even more egregious for children. Long-term exposure to stress hormones triggered by trauma, food insecurity and poor physical health irreversibly affect brain development in children.

In 2013, the WHO created and committed to a mental health action plan with the goal of increasing access to services for mental illnesses in 135 countries. The goal was to increase access by 20 percent and reduce suicide rates by 10 percent by 2020.

The Convention on the Rights of Persons with Disabilities, which entered into force in 2006, has also been instrumental in raising awareness of the unique ways in which poverty and human rights violations can cause disabilities and exacerbate the symptoms of pre-existing disabilities.

World Mental Health Day may not be the final solution to reducing stigma and increasing access to mental health services across the world, but it is an important step in legitimizing and validating mental health on the world stage.