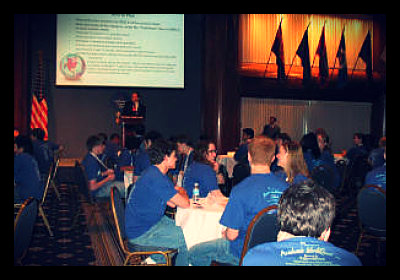 What is an Academic World Quest? It is an international trivia competition for high school students, the first program of its kind started by the World Affairs Councils of America (WACA). Any high school in the Boston metro area and its five inclusive neighborhoods is eligible to participate. Teams of four meet strategically throughout the academic year and compete in the spring. The winning team of WorldBoston travels to Washington, D.C. to compete against teams from across the country.

The program was implemented to educate young citizens about inequality across the globe. Topics like government corruption, political instability, economic inequality, insufficient human rights and others issues affecting foreign nations are covered in the competition. The school system in Boston truly believes that the key to preventing future inequality is educating students now.

WorldBoston is a nonprofit organization that connects international leaders in various professional fields with local community figures to educate each other on relevant international issues. Founded in 1961, it was originally named the Boston Center for International Visitors before joining forces with the World Affairs Council of Boston. Guests in the areas of politics, education, news, arts and sciences have been hosted by WorldBoston to speak about their experiences and share their ideas for a better future. Small businesses, large corporations, mom & pop shops, local coffee houses, schools, and many more organizations within the city can benefit from this program.

Knowledge is not contained within the minds of its students; the information gained at these WorldBoston events will reach far beyond the city lines. Encouraging children and adults alike to reach out to foreign nations struggling with poverty creates a sense of friendship and power to make a difference.

The city of Boston itself is founded on a history of independence and compassion for refugees. Anyone who has read the Statue of Liberty, the famous gift of France, will remember its message. “Give me your tired, your poor, your huddled masses yearning to breathe free…” This message is a symbol of freedom not only to Americans, but to anyone in the world striving for the kind of freedom that Americans enjoy. Returning to original ideals of the United States that involved helping people who needed it the most is something that WorldBoston and the Academic World Quest can help accomplish.