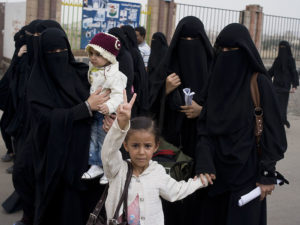 Women in Yemen are enduring one of the worst humanitarian crises in history. After a 2011 Arab Spring uprising forced longtime dictator Ali Abdullah Saleh out of office, deputy Abdrabbuh Mansour Hadi took power and enlivened Yemenis with hope for change. In contrast to these expectations, however, civil unrest and development setbacks like corruption crippled Hadi’s government. The Houthi movement, a militant Shiite group, capitalized on this political disarray in 2015 and seized huge territories throughout the country, including the capital in Sana’a. Soon after, a coalition of U.S.-backed, Sunni-majority countries deployed troops to eradicate this Shia influence in Yemen. A brutal war followed that has expelled Hadi from the country, killed thousands and deepened extreme poverty and food insecurity for millions. The conflict has subjected women, who are already victims of deeply rooted prejudice, to increasingly unjust gender roles and violence. Fortunately, numerous organizations and legislation are working to advance women’s rights in Yemen.

Patriarchal norms have long prevailed in Yemen. For 13 years, the Global Gender Gap Index has identified women’s rights in Yemen as the worst in the world. As the fighting continues, widespread instability is magnifying the country’s vast gender inequality.

Educational and economic opportunities for Yemeni women are severely limited. According to the World Economic Forum, only 35% of women are literate compared with 73% of men. While a majority of women receive primary education, only 40% continue on to secondary schooling. Such educational gender disparity, coupled with misogyny in the job market and burdensome responsibilities at home, contributes to women’s shockingly low labor force participation rate of 6.3%.

Beyond economic injustice, Yemeni women face a bleak social landscape. Tasked with managing the domestic sphere, women strain to procure even basic necessities such as food. This is especially true recently, as the civil conflict has subverted conventional supply lines. The concept of males as female guardians further jeopardizes women’s safety in Yemen, as a woman is considered safer when escorted by a male. With working husbands and pressing needs at home, however, women are forced to venture out unaccompanied. Without effective laws to defend them, women are left vulnerable to sexual assault and physical violence.

Years of conflict have eroded the institutions that once might have protected these women. The urgency of national stability has also relegated women’s security to a position of low priority. Even in previous times of peace, however, women had little means to voice grievances and even less power to enact change. Today, Yemeni women’s political participation remains low, with women making up a paltry 0.3% of parliament.

Amid the global push for gender equality, traditionalist insecurities drive men to violent retaliation against societal change, exacerbating the challenges women already face. But the outlook is not entirely hopeless. Here are four forces that are working to advance women’s rights in Yemen.

As the civil war rages on, women’s conditions in Yemen may appear an irremediable predicament. Yet determined organizations, dynamic legislation and a country of women eager to escape society’s shackles are working to advance women’s rights in Yemen and make gender equality a reality.