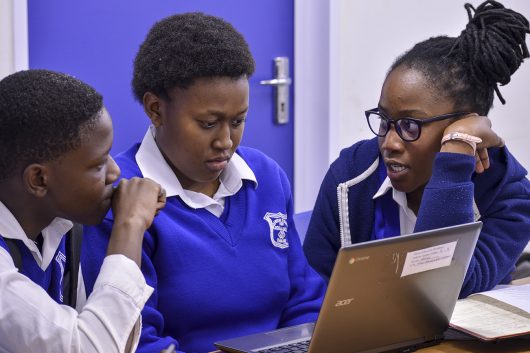 Historically, young South African women have struggled to hurdle barriers restricting them from getting a decent education. Poverty is the greatest demobilizer for girls 17 and younger, as the more than 13 million children who live in poverty do not have consistent access to education. And if girls do get access to school, they are victims of rape at the hands of educators and male classmates, as most South African schools lack separate bathrooms and proper staff to protect the children. Twenty-three percent of South Africa’s 37 million people are rural black female South Africans who have had no education.

South Africa is a patriarchal society where young girls are often considered lower class, classified as child bearers and keepers of the home. For this reason, young girls are forced to drop out of school to care for ill family members, raise younger siblings and also become young mothers themselves. Girls are also discouraged from taking certain subjects that would elevate them academically. But things are changing.

The Girls’ Education Movement (GEM) of South Africa, with the help of UNICEF, has been a crusader for young South African girls. Together they have made grassroots efforts to do the following for girls’ education in South Africa:

The GEM initiative is motivating schools in South Africa to respond the needs and rights of girls.

The United Nations Girls’ Education Initiative (UNGIE) is also making an impact on girls’ education in South Africa through the Techno Girl program, which encourages young girls to pursue careers in science, technology, engineering and mathematics. This public-private collaboration with UNICEF and the Department for Women, Children and Persons with Disabilities has helped more than 4,250 girls and is on track to empower more.

The United Nations Educational, Scientific and Cultural Organization (UNESCO) plans to continue its quest to end illiteracy among girls in South Africa. UNESCO uses indicators to help donors, partners and governments target resources to schools with disparities against girls. They target schools that need access to separate bathrooms for girls and boys to increase safety for young girls. An increase in female teachers is also encouraged for mentorship and advocacy.

Girls no longer have to live below average. Democracy is advocacy for education equality. Young girls should be afforded equal opportunities and safe conditions as they aim for academia. Girls’ education in South Africa is making great strides. Resourceful programs are targeting poverty, abuse and social factors that deny South African girls a proper route to education.