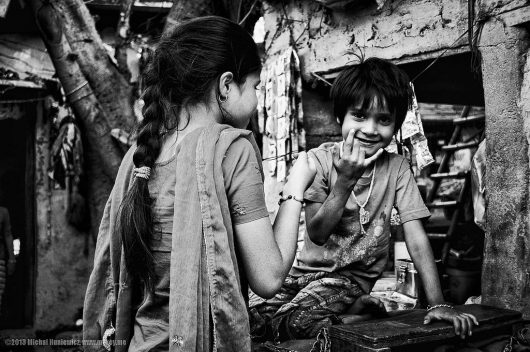 Many people living in India’s slums do not have a toilet in their own home. Their only option for using a toilet is walking 15 minutes to a run-down community toilet and waiting in an often chaotic line.

For men, relieving themselves in the open is an option, albeit one with negative effects on public health. Women who do this are targets for harassment, so they drink very little water and wait for the protection of nightfall to perform this necessary human function. 15 years ago, the miserable conditions in the slums of Ahmedabad prompted the Gujarat Mahila Housing SEWA Trust to use community-based women’s organizations to improve sanitary conditions.

The SEWA Trust identified local women leaders who recruited other women to join community-based organizations. These women were trained in sanitation system planning and how to demand funding from certain government programs. The women’s collectives in India monitored and maintained the sanitation systems they installed. Communities paid for one-third of the costs and the government covered the rest.

The program ultimately established 46 community-based organizations in 895 slums, trained more than 13,000 women and installed toilets in nearly 90,000 households. Many women opened bank accounts during the course of the program, strengthening their financial power.

Women used the skills gained from sanitation planning to tackle other issues in their communities. One woman used her skills to convince a power company to supply electricity to her slum. That company adopted a modified payment plan and eventually supplied electricity to nearly 1 million people in India. Many of the original community-based organizations have expanded to become citywide federations and make their voices heard in city planning.

CARE is an organization that is dedicated to ending world poverty, and one of the methods they use is establishing women’s collectives in India and around the world. On average, women joining CARE collectives see their yearly income increase twice as quickly as women in similar communities without CARE collectives.

According to women surveyed by CARE, the five main barriers to their economic empowerment are lack of time, limited access to resources, violence, low incomes and the productivity gap between men and women. Women who join CARE collectives fare better in all five categories compared to those who do not.

The number of women who believe that it is acceptable for their husband to beat them dropped from 50 percent in the control group to 12 percent in CARE collectives. The percent of women who feel that they have control over their income is 37 percent higher for women in collectives.

Women usually have access to 50 percent of the resources that men do, but for women in collectives that number jumps to 90 percent. Women’s collectives are not only effective in solving menacing community issues, but a tool for empowering women in all aspects of society.