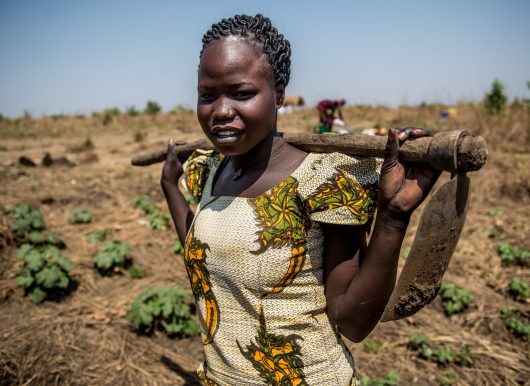 South Sudan has been in conflict since 2013 and violent stories are ubiquitous for women as a civil war continues to ravage the country. Rape has become “just a normal thing,” according to one South Sudanese woman, and abuse from both rebel groups and government forces are the norm. The war has displaced two million people and the country is close to another famine. Fortunately, the urgent need of help for women in Sudan is apparent as several organizations have stepped in to assist.

Through its year-long programs, Women for Women International has served more than 15,000 women in South Sudan. At least 80 percent of the country’s population lives on less than $1 a day, however, upon graduation of this program, these women report average personal earnings of $1.29, compared to just $0.12 at enrollment.

They also develop better health and well-being. One in seven women die during childbirth but, after the program, 98 percent of participants begin practicing family planning. Whereas only two percent reported family planning before enrollment. Planning also leads to a more equitable marriage. Ninety-six percent of participants begin participating in household financial decisions. That percentage sat at just five percent before the program.

The biggest hurdle they have overcome is that the women now connect. Eighty-three percent of women in the program report sharing information about their rights with others. These women “create and connect to networks for support and advocacy.” It was zero percent before the program.

Another major support organization for women in South Sudan is the International Rescue Committee (IRC). The IRC has been one of the largest providers of support in southern Sudan, sourcing aid for over 20 years and throughout decades of war. They have an action plan that strategizes and prioritizes its programs and focus areas through 2020.

Perhaps the biggest impact for women in South Sudan is Five Talents. Since it started in 2007, Five Talents has become one of the few organizations that have developed a sustainable model for microfinance. For the past ten years, the program has created opportunity in “areas of desperate need” working with hundreds of communities across the country. The program’s unique approach has “provided a foundation for sustainable business development in even the most difficult contexts.” The program begins by gathering both men and women in South Sudan together in local churches and teaching them to read and right and then offers financial training. To date, over 16,000 women have learned to read and write, three banks have been established and roughly 30,000 have joined community savings groups.

The training program consists of:

Since the creation of Five Talents, “tens of thousands of lives have been transformed,” both men and women.

In December 2013, the United Nations Security Council, to further help the cause, authorized the deployment of approximately 6,000 security forces, in addition to the 7,600 peacekeepers already in the country to aid in nation-building efforts in South Sudan. However, as the nation’s women continue to face desperation, the Security Council voted to shift the mission’s mandate from nation-building to civilian protection in May 2014. The road to peace and civility may be a long one for women in South Sudan, but as they and the world refuse to sit idly by, these women will prevail.