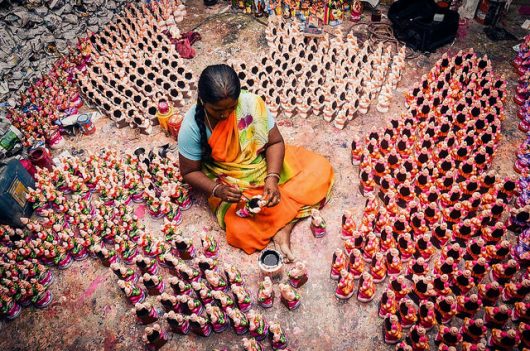 Small-scale enterprises have been a large part of industrialization as well as job creation in India. As defined by the Micro, Small and Medium Enterprises Development (MSMED) Act of 2006, a microenterprise in India is a small business in which the investment in plant and machinery is no more than $ 40,000. Microentrepreneurship and women entrepreneurs are alleviating poverty in India, particularly because up until the past couple of decades women were a largely untapped source of economic potential.

The Government of India has defined women entrepreneurs as those whose enterprise has a minimum financial interest of 51 percent of the capital and is made up of at least 51 percent female workers. Although rural women in India are mainly responsible for agricultural production, domestic duties and childcare, their economic status is low in a male-dominated society. Women in India have been able to raise their economic status and fight poverty in their country by taking charge of microenterprises.

Increasing the participation of women in micro, small and medium enterprises is an important stepping stone to alleviating poverty in India because not only does it engage women in productive work outside their homes, but it also empowers them and improves family health. In addition, women entrepreneurs can provide society with different management, organization and business solutions because of their different perspectives and skills.

One major resource for women entrepreneurs in India are the Self-Help groups (SHGs) provided by the Government of Bihar and supported by the World Bank. These groups are part of what is known as “Jeevika”, the Bihar Rural Livelihoods Project. (“Jeevika” means “livelihood” in Hindi.)

SHGs provide skills training, access to markets and finance as well as business development services. There are 45 million rural women in India who have been empowered by these SHGs under the National Rural Livelihoods Mission (NRLM) in 2011. The NRLM has saved $ 1.4 billion, leveraged $ 20 billion from commercial banks and is helping nearly 3.3 million women farmers increase agriculture and livestock productivity. Here are some success stories that, with the help of such programs, show how women entrepreneurs are alleviating poverty:

Women have, therefore, been able to use household skills to knit, stitch, weave and embroider for developing their microenterprises. They have also been able to use their technical skills and raw farm materials to earn substantial incomes and small agricultural units.

In conclusion, one reason the future of economic growth in India looks bright is that women entrepreneurs are alleviating poverty with their growing microenterprises. That is to say, the empowerment of women in India goes hand-in-hand with the auspicious development of microenterprises.