Tag Archive for: Why is Brazil Poor 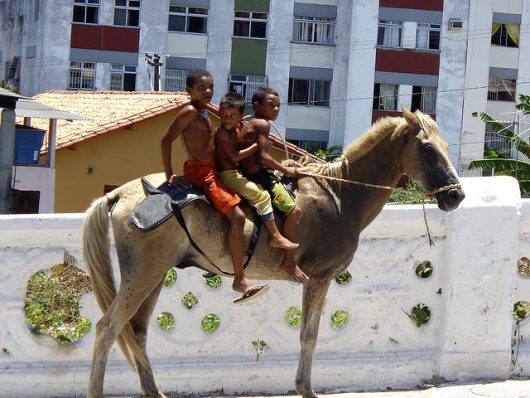 Brazil is the world’s fifth largest country by both population (roughly 210 million) and geographical area (3,287,597 square miles). It is also the world’s eighth largest economy and previously hosted the 2016 Olympics. Despite these feats, Brazil struggles to recover from the worst recession in its country’s history. While Brazil is not poor, the level of people in poverty there is well above the norm for a middle-income country. Here are three answers to the question, “Why is Brazil poor?”

According to USAID, inequality of land distribution is a major factor contributing to poverty levels in Brazil. Brazil’s poor have inadequate access to desirable land, and NPR reported in 2015 that one percent of the population controls 50 percent of all the land in Brazil.

This means that 2 million people (out of a total population of 210 million) control half of the country’s entire square footage. The other 99 percent have little access to land ownership, making it difficult to improve their economic status. Brazil is one of the most unequal places in the world when it comes to land distribution.

Claudia Gostin, the education secretary for the city of Rio de Janeiro, told the Global Post that Brazil has educational apartheid taking place in its country. Apartheid is a system that separates people on the basis of color, ethnicity or class. Brazilian schools are separated by class and one could also argue race.

According to the Global Post, class divisions in Brazil are ingrained around the age of five. Depending on their economic class, Brazilian children are either sent to rundown public schools that prepare them for mediocrity or they are sent to high quality private institutions that prepare them for upper echelon roles in society. Lower class Brazilians are taught by second rate teachers in under resourced buildings with shorter school days than their peers. These factors lead to several drop outs and graduates who are unprepared to compete for high tech jobs in the white-collar work force.

In addition, Brazilians who identify as black or brown and compose more than 50 percent of the population have income levels that are half of whites. This keeps Brazil’s black and brown population in poverty and at the end of Brazil’s social totem pole.

According to the World Factbook, Brazil’s economy has been affected by several corruption scandals involving private companies and government officials. Penalties against the companies involved — some of the largest in Brazil — limited their business opportunities, producing a ripple effect on associated businesses and contractors.

In addition, investment in these companies also declined due to scandals. This is in turn has had a negative effect on the country’s poor population because companies involved in the scandals cut jobs. For example, Corporate Compliance Insights states that oil company Pertrobras was the country’s largest company and investor making up 10 percent of Brazil’s economy, but after a corruption scandal within the company, Brazil lost 27 billion (at least 1 percent) in GDP in 2015. The company also reduced its workforce by 34 percent, and fewer jobs equals less opportunities for Brazil’s poor to improve their circumstances.

So, why is Brazil poor? A history of inequality that runs deep in the country propels the cycle of poverty for Brazil’s poor. Race, class, education, land and government are all sources of power that dictate where wealth remains in Brazil.

Hope remains for Brazil’s poor despite its past. Poverty has been nearly wiped out for the elderly due to well-funded pensions. What is more, state funded programs such as Bolsa Familia have lifted tens of millions out of poverty and now, more than half of Brazil’s population is considered middle class.

Expanding opportunities for education, access to land and less corruption in government will pave the way for a more equitable Brazilian society.