Tag Archive for: Who Are the Roma 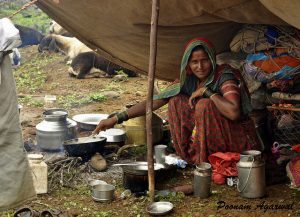 Who are the Roma? While believed to have originated from Egypt (hence the slang term ‘gypsy’), the Roma people can actually trace their origins back to northern India. From around 700AD onward, they migrated across Europe, working as entertainers, artisans and farmworkers. For a long time, they managed to get by in this fashion without issue.

As time went on, cracks began to appear in their initial acceptance. It seemed that everywhere the Romani people went, the ruling class wanted to tie them down or expel them. If they went to places such as Wallachia and Moldova, for example, they would find themselves enslaved. Moving to western European countries like Spain meant death or forced assimilation.

After the last emancipation of the enslaved Romani people in 1864, it seemed as though the Roma group had begun to make some progress. In the years after the first World War, the Roma began to make moves towards social and political lobbying. The first Romani organization, The General Association of Romanian Roma, appeared and The World Roma Congress had its first meeting in 1933.

Then, the Nazi regime began to target the Romani people along with the Jews. During World War II they faced the stripping of their nationality, deportation to labor camps and even mass executions. It is estimated by historians that at least 220,000 Roma were killed in Europe during World War II, but the exact numbers are unknown.

Who Are the Roma?

Now, ask the question today: who are the Roma? One would assume that, in a modern-day society that focuses on social inclusion, the Romani people would fare better today. Yet, even in the present day, the Roma remain the group the most discriminated against in Europe.

The Romani people today find themselves the victims of hate crimes such as having their homes burned or physical assault. In many of these cases, the local police fail to provide them with the protection or justice that they need. The police are also known to discriminate against the Roma and treat them with less dignity than non-Roma.

They also struggle in everyday society due to the disadvantages of prejudice. Despite regulations, situations such as segregated schooling for Romani children and lower wages for Romani workers still exist in Europe. Some Romani people even have trouble purchasing land on which they could build homes. This means that even those who want to work for a better life might have trouble achieving it.

Thus, the Romani people could remain trapped in their current disadvantaged situation. Consider the fact that 70 percent of the Roma population throughout the world lives in poverty. Many of them live in slums without electricity or running water.

Where Can the Roma Turn to in Search of Hope?

Government intervention seems the only possible way to provide the Roma with the assistance that they need to rise out of their current situation. And indeed, the governments of multiple countries have created programs of varying success, such as the Phare programs of the early 2000’s.

Yet, a 2013 Brigham Young University Paper indicates what might prevent the success of Roma assistance. The paper stated that at least in Romania, the local governments focus upon the integration of the Roma into society. They do not focus on integrating Romani people in a way that will not kill their culture.

Indeed, many Romani people still live traditional, nomadic lives and are unwilling to leave them even if it means living in poverty. This culture, however, clashes with the current sedentary European culture. Unless these two cultures can find a compromise in the future, some Roma might still live on the fringes of society.

There are groups like The Minority Rights Group International and Amnesty International that are working to educate people about the Romani people by working with the Roma communities and governments. The U.N. has been working with the Former Yugoslav Republic of Macedonia to address providing business opportunities and social services to the Romani people in the country through enacting a two-year “Action Plan for the National Roma Strategy.” They hope to find solutions to many of the problems the Romani face every day.

Ask the question again: who are the Roma? They are a people who have faced countless tragedies in the past and now face an uncertain future. Yet, when given the assistance and understanding that they need, they may be able to find their own place in society where they can thrive.