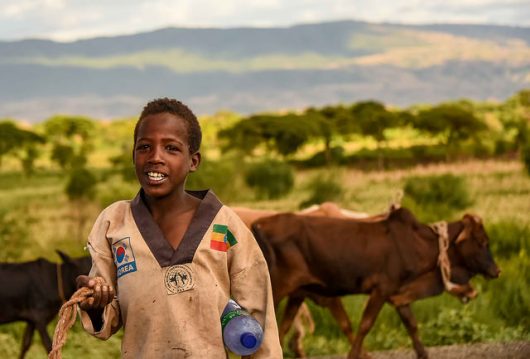 Policy in Ethiopia has overwhelmingly been focused on combating and eliminating poverty in recent years. Many programs in Ethiopia have helped to further the country’s station in terms of poverty reduction. Programs such as the Productive Safety Net Programme (PSNP), the Sustainable Development and Poverty Reduction Program (SDPRP) and the Plan for Accelerated and Sustained Development to End Poverty (PASDEP) have been implemented recently to help Ethiopia meet its short and long-term goals. These goals, known as the United Nations Millennium Development Goals, are to:

Correspondingly, according to the United Nations, the Ministry of Finance and Economic Development in Ethiopia report, the World Health Organization and the World Food Programme, Ethiopia has worked towards these goals for several years now and is on track to achieve six of the eight goals listed above so far. The goal of reducing child mortality has already been achieved, and progress is being made on many of the others thanks to the work of the welfare programs in Ethiopia.

Ethiopia is on course to reduce extreme poverty in the country by half. The percentage of people living under the poverty line has decreased from 45.5 percent in 1996 to 29.6 percent in 2010. The welfare programs in Ethiopia have contributed to this progress in different ways. The PSNP has helped families avoid food shortages. The SDPRP focuses on increasing water resource utilization to ensure food security. The PASDEP strengthens human resource development, manages risk and creates employment opportunities.

Ethiopia has achieved a greater decrease in disease prevalence than anticipated. In 2010, the prevalence of HIV/AIDS was an estimated 1.5 percent, lower than the Millennium Development Goal of 2.5 percent.

With the Climate Resilient Green Economy strategy, Ethiopia has taken necessary steps towards integrating the principles of sustainable agricultural development. The SDPRP has aided the progress of governance and the transformation of society by improving the framework and provisions enabling environmental and private sector growth. It also focuses on agricultural research, water harvesting and small-scale irrigation.

Goals three and five of the Millennium Development Goals lack progress and are struggling to be realized. Entrenched traditional views of women in the nation are among the obstacles that these programs encounter. However, on the whole, the employment of these programs in Ethiopia has decreased the overall issue of poverty and have moved the country forward in terms of development.