Tag Archive for: Welfare in Japan 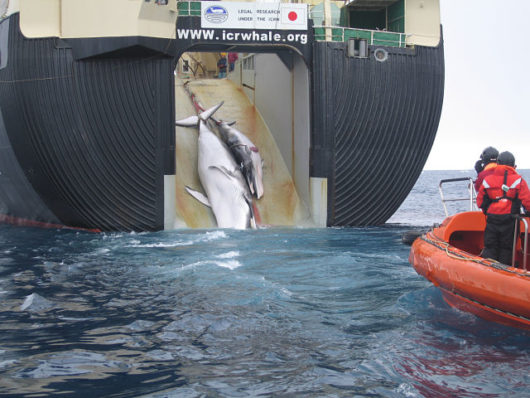 Whale hunting in Japan is immaterial to feeding the population. As a result, many wonder why the nation continues to practice the antiquated ritual, while a bulk of its citizens are starving and fighting an uphill battle against the national welfare program. Japan’s current poverty rate is 15.3 percent, and more than 19 million citizens are living below the poverty line.

Welfare and Whale Hunting in Japan

The Japanese government has defended whaling practices by claiming that the practice is a part of the ancient Japanese culture. From the 1940s to the mid-1960s, whales were the biggest source of meat for the Japanese people. This was due to food shortages throughout the country. The government found an inexpensive solution in canning whale meat and serving in the government-funded national school lunch programs. At the highest point of the hunt, 24,000 whales were killed in just one year.

However, the economic climate has shifted. Japan has one of the wealthiest economies in the world and can easily afford to import meat from the United States or Australia. Currently, with Japan leaving the International Whaling Commission (IWC), the financial burden of whaling will again fall on taxpayers. Expenditure of citizens’ tax money on whaling is justified by classifying whaling as research. The International Court of Justice has disproved Japan’s research claims, yet, funding that could be allocated to other benefits, like welfare, continues to be allocated to the practice.

According to a poll in 2015, the average consumption by the Japanese people of whale meat was just one ounce per person. Whale meat in Japanese cuisine has only been popular post World War II, and it would be categorized as nostalgia food by older generations. Nevertheless, Japan continues to fund whaling with $50 million annually. Regarding the Japanese welfare system, the central government acknowledges 75 percent of the costs, and Japan is planning on cutting back even further to their system.

When it comes to welfare,  Japanese citizens do not have the right to be taken care of by the government. Welfare in Japan is most commonly utilized by either the elderly, single mothers or handicapped citizens. Currently, there are five million unemployed Japanese citizens. Since 2008, the Japanese government has tried to make acquiring government assistance more manageable. However, most applicants are obliged to ask their family for help before applying, and impoverished people who are physically capable of working are still ineligible.  Professor Hiroshi Sugimura from Hoesei University in Tokyo said: “Local governments tend to believe that using taxpayer money to help people in need is doing a disservice to the citizens, only those who pay taxes are citizens.” The government currently gives 3.4 trillion Yen to welfare a year, but this only amounts to 10 percent of all tax revenues.

With the strict guidelines of the welfare program, people in need often slip through the cracks. Just in the past ten years alone, 700 Japanese citizens have starved to death, most of them elderly people. While the poverty rate in Japan does not reach the global levels (nearly 3.4 billion people, or half of the world’s population, struggle to meet basic needs),  Japan is currently in the lowest category of children in need, with the OECD estimating there are 3.5 million Japanese children who are living in relative poverty.

An organization called Second Harvest provides the only nationwide food bank in Japan. Since 2002, Second Harvest has been food security for the needy. It delivers to children’s homes, women’s shelters and handicapped facilities. Second Harvest also works tirelessly with companies to acquires left-over food that is still edible and recycles it into free meals.

The Japanese government supports the Sustainable Development Goals, one of which is to bring hunger to zero by the year 2030. Japan is putting forth procedures that will help build a sustainable society and help with social improvements. By incorporating the Sustainable Development Goals, Japan is hoping to prioritize ancillary benefits, far removed from previous oversight, promoting human rights for every citizen.

The heated issue of whale hunting in Japan and the hunger of its citizens has been recognized by the Japanese government. Acknowledging the fact that many citizens are starving to death, and few are interested in eating whale meat, is an impetus for the government to remedy the issue. Solutions are being established and proposed on a regular basis, and with time. these two issues will be combatted and Japan’s healing as a nation will happen quickly.