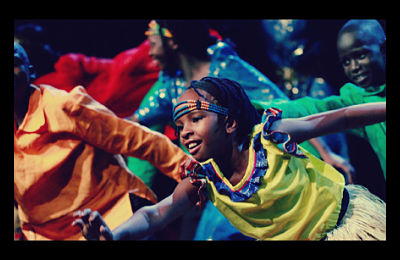 Ugandan orphans sing their stories and hope for a brighter future.

The worshipers in Kent’s Hextable Church last Sunday were dazzled by the performance of the Watoto Children’s Choir. The Choir comprises of Ugandan children who have all lost their parents through war or disease and have been taken in by the Watoto Child Care Ministries.

The program was started in 1994 by Gary Skinner and his family, who had moved to Uganda 14 years earlier to build a church in Kampala, the country’s capitol. After meeting a 79-year-old widow who had lost her husband, lost six of her children to AIDS and who was now watching her last daughter die of the same disease, Skinner was compelled to start a program that would not only harbor orphans, but educate and support them as future leaders.

The Watoto model for raising these children includes physical care, medical intervention including HIV/AIDS treatment and trauma counseling, both a formal and technical education and spiritual guidance: “We exist to raise the next generation of African leaders, by pursuing excellence in academic and practical skills, integrity in conduct and moral values, so that each one becomes a responsible Christian and a productive citizen.”

The choir is comprised of 18 children and young adults who sing, dance and tell the audience about themselves and their experiences traveling with the choir. The group has been all over the world, performing in Uganda, Kenya, South Africa, Australasia, Germany, France, the United Kingdom and the United States, South America, Hong Kong, China and Japan. With four CDs out and a growing fan base, the group spreads awareness and generates funding for their fellows back in Uganda.

Jerry McQuay, a U.S. pastor who sponsored a performance from the group wrote, “The choir itself will steal your heart with their music, dance and stories, and when you hear the holistic approach that Gary and Marilyn Skinner are using, you’ll see how you can be a part of truly changing a nation.”