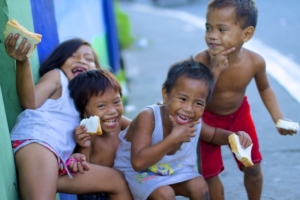 Hunger and poverty are problems millions of people face around the globe. According to The U.N. Food and Agriculture Organization, 815 million people were chronically undernourished in 2016. However, in the past few decades, the world has made major progress in terms of alleviating hunger and poverty overall. Between 1990-92 and 2012-14, the global undernourished population reduced by 42 percent. There are several non-governmental and nonprofit organizations continuing on that trend to eradicate world hunger and poverty through several different methods. Below are five NGOs aiming to end poverty and hunger.

Akshaya Patra is a nonprofit organization that began in Bengaluru, India. Since the year 2000, the organization has been providing poor children with fresh and nutritious meals at schools. The aim of the organization is to eliminate malnutrition in children, as well as support the right to education for children whose families cannot afford it. When the organization started out, it was a very small-scale project that focused on local schools in rural regions. Initially, the organization began with feeding 1,500 children locally. Today, Akshaya Patra partners with the Indian government and multiple state governments. Additionally, it feeds 1.7 million children across the country. This makes it the largest mid-day meal program in the world and one of the most successful nationwide NGOs aiming to end poverty.

Green Shoots is an organization that emerged in 2010. The organization approaches poverty through microfinance, sustainable development and holistic programs. The main aim of the organization is to improve access to education and access to medical aid in developing Asian and African countries. There are multiple programs that the foundation has implemented based on the specific needs of each region. Some of these programs include Education Loans and Social Entrepreneurship (ELSE), Food Agriculture and Social Entrepreneurship (FASE) and Medical Assistance and Medical Education (MAME). Countries that the Green Shoots Foundation has worked in include Cambodia, the Philippines, Myanmar, Vietnam and Kyrgyzstan.

Action Against Hunger is an organization that focuses on ending hunger around the globe. The organization focuses on families with young children. So far, Action Against Hunger has contributed to providing aid in over 45 countries to over 21 million people. Its main aim is to double the number of children it is aiding by 2020, due to the fact that millions of children around the globe still remain undernourished. The organization deals with problems that stem from or worsen hunger as well, including nutrition and health, water and sanitation, food security and livelihoods and emergency response.

BRAC is a non-governmental organization from Bangladesh. The organization mainly aims to end poverty but also focuses on several other issues that people living in rural or poor communities face. Its main social development goals include eliminating extreme poverty, increasing financial opportunities and choices, developing skills for employment and investing in education. BRAC emerged in 1972, and has since positively impacted the lives of over 100 million people globally. The program focuses on developing and improving conditions in 11 major countries including Afghanistan, Bangladesh, Liberia, Myanmar, Nepal, the Philippines, Rwanda, Sierra Leone, South Sudan, Tanzania and Uganda. Today, BRAC is the largest development organization in the world.

Hunger and poverty are extremely large scale global issues that will take time, global effort and multiple solutions to solve. The examples of the non-governmental and nonprofit organizations above show that though progress is slow, it is steadily progressing.

These five NGOs aiming to end poverty have made significant progress on their own. Several similar organizations across the globe are working towards meeting multiple hunger and poverty goals as well.