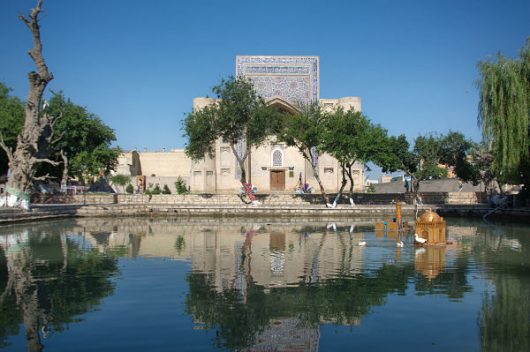 As one of the largest countries in Central Asia with a population of 32 million, Uzbekistan is a regional economic and political leader. Recently, Uzbekistan has turned its attention to the pressing issues of environmental protection and water quality. In the last decade, water quality in Uzbekistan has been a main focus thanks to government and service providers’ efforts to expand and modernize the water sector across the country. Although access to an improved water source has declined by less than one percent, increased investment in water supply and sanitation has provided the foundation for reform in Uzbekistan.

Uzbekistan has amassed the largest borrowing portfolio for water projects of any Central Asian nation, including the Alat and Karakul Water Supply Project. Started in 2013 with financing from the World Bank, the project has improved quality and efficiency of water supply for more than 220,000 Uzbeks from the districts of Alat and Karakul in the Bukhara region. The World Bank has partnered with Uzbekistan since 1992, and its total commitments to the country exceed $1 billion.

The government has taken on these initiatives in response to the recent problems facing water quality in Uzbekistan, including water availability and pollution. More than half of Uzbekistani households do not connect to a piped water system; sewerage systems serve only 40% of the population. Much of the government’s efforts concentrate in the rural region of Karakalpakstan; it has some of the worst water quality in the country and has dealt with setbacks due to a uranium scare in 2008.

While the government-established State Committee for Environmental Protection has made limited efforts to curb water contamination in the last 15 years, nongovernmental organizations have spearheaded the effort to establish regulation to reduce harmful runoff and protect water resources.

Much of Uzbekistan’s economy relies on its environment, from its booming cotton industry to its oil and natural gas supplies. Environmental issues pose a threat to the country as a whole, with water availability as a top concern. Studies have shown that global warming may hit Central Asia the hardest in terms of temperature risings and potential drought. Uzbekistan must confront existing issues such as chemicals from cotton production contaminating freshwater, as well as future threats from climate change.