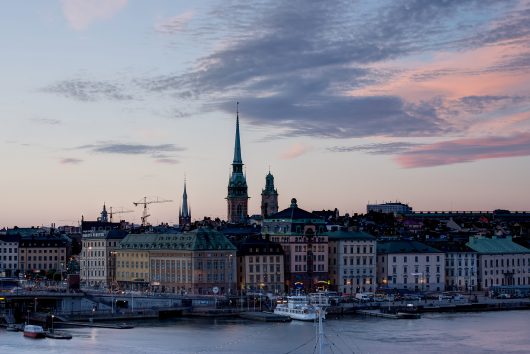 With a national growth in population and a changing environment, access to sanitary water has dwindled and become sporadic across the world. The amount of water in the world is finite, yet there remains a high demand. The suitable supply and water quality in Sweden stand as a role model for the rest of the world.

Quality
An OECD survey of average satisfaction with local water quality reports the world average is about 81 percent, yet Sweden’s satisfaction levels top that at 95 percent. Because half of Sweden’s water supply comes from lakes and running water, with the other half being groundwater, their water requires minimal purification.

In addition to their natural extraction methods, Sweden has also enacted programs to ensure adequate water quality. The 2007 to 2013 rural development program granted SEK 510 million to aid agriculture by minimizing nutrient leaching. A study of 65 streams shows a decrease in the amount of nitrogen and phosphorus in bodies of water that surround agricultural fields, due to restrictions on the use of these harmful fertilizers.

Water quality in Sweden relates not only to sanitary drinking water, but also to the health of crops and lifeforms in aquatic environments. Thus, the Swedish Agency for Marine and Water Management allotted SEK 310 million for water management, fish conservation and the protection of threatened species. Sweden identifies that human-made substances are detrimental to the quality of water and has adopted the Non-Toxic Environment objective to ensure an environment free of all chemicals created by man that threaten the environment.

Supply
Sweden remains one of few countries with a vast number of large reservoirs, providing Swedes with a guaranteed resource for freshwater. Other countries are not as lucky to have such a reliable source of quality water, so a part of Sweden’s success lies with the country’s natural foundation.

However, reservoirs can be manmade, giving other less fortunate countries a valid option to gain more reliable access to water. All of Europe’s reservoirs combined grant its people with 20 percent of their overall water usage.

Even further, various parts of Sweden have suffered from droughts or flooding. The irregular weather causes farmers to relocate or to increase irrigation practices. Increases in precipitation have caused negative health effects. The excessive amount of water causes sewage overflow, leading to waterborne diseases. A study in the U.S. demonstrated that 51 percent of waterborne disease outbreaks occurred right after heavy rainfall.

Sweden has implemented programs to ensure the supply of water remains sustainable. The government focuses on protecting bodies of water, since these lakes and reservoirs make up a great percentage of the country’s water. In 2010, they enacted laws to restrict water usage and minimize the overall demand for water. The EU Water Framework Directive incorporated water efficiency plans and water resource management. Although Sweden’s percentage of water gained is on the rise, they are still working to conserve it and lower their demand for quality water.

Perhaps other countries, developing and developed alike, can take Sweden’s lifestyle regarding water into account as the nation works to conserve its suitable water.