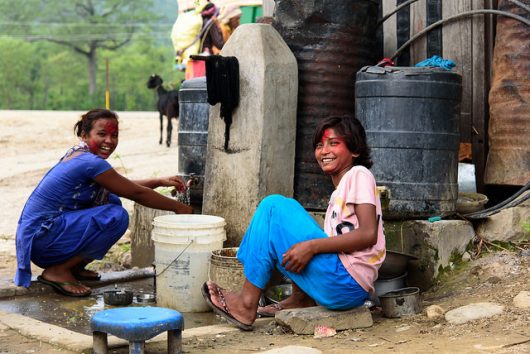 A landlocked nation approximately the size of Illinois, Nepal is the poorest country in the Southeast Asia with as many people enjoying life as those living in abject poverty.

With less than half of the population of 27 million having access to safe drinking water, poor water quality in Nepal and an inadequate supply of water has a dismal cost: about 45,000 children below the age of five in the country die each year due to water sanitation problems. Forty-two percent of the population lives below the poverty line and only 27 percent have improved access to sanitation.

The average life expectancy of about 68 years for men and 71 years for women is correlated with a lack of health care, access to clean water, and abject poverty in the country despite improving conditions.

For instance, it is estimated that child mortality can be reduced by 55 percent if water quality and sanitation issues are addressed to avert the public health risk.

Nepal has seen an increased number of floods, droughts, hailstorms, landslides, and crop diseases. This has mainly affected the subsistence and livelihood of the poor with no way to combat the effects of climate change.

Eighty percent of Nepalese have access to drinking water, yet the water provided or gathered is often polluted.

Though 92 percent of households in the country’s rural areas have access to a drinking water source, microbial contamination in these waters means that water is unsafe for consumption. An assessment in mid-western Nepal found that 70 to 80 percent of the taps do not deliver safe drinking water.

The Kathmandu Valley, a UNESCO World Heritage site, has deteriorating surface and ground water due to natural and man-made contamination. Industry and domestic waste, the majority of which is produced from the capital city of Kathmandu, is commonly discharged into rivers and lakes. Water resources are also stressed due to a growing population and depleting natural water resources.

In 2016, doctors found an increasing number of waterborne diseases – such as diarrhea, dysentery, typhoid, gastroenteritis and cholera – in Kathmandu due to water contamination and a lack of proper hygiene.

Baburam Marasini, chief of Epidemiology and Disease Control Division under Department of Health Services, reported an “increase in the number of cases between 25 and 30 percent who [came] to visit hospitals suffering from diarrhea, typhoid and fever, mostly due to poor quality drinking water inside Kathmandu.”

Describing the unsafe conditions in rural areas, Marasini explained the causes for this increase. “The rains during the monsoon are responsible for outbreak of communicable water-borne diseases like cholera and diarrhoea in many rural villages,” he stated.

To improve the health and sanitation of the Nepalese, awareness programs are needed. The public has been said to lack awareness of the water sanitation issues, with some communities partaking in drinking contaminated water, failing to observe proper hygiene practices, and generally being unaware of waterborne diseases and their role in helping improve the water quality in Nepal.

Solar disinfection programs (SODIS) have been found to be an effective remedy to help improve water quality in Nepal. However, “heavy domestic and agricultural workloads, other cultural barriers, uncertainty about the necessity of treating the water, and lack of knowledge that untreated drinking water causes diarrhea” did not allow for a successful adoption of the SODIS program. Clearly, a more elementary awareness approach is needed.

Water quality in Nepal can be improved by making safe drinking water more available and accessible. Institutional coordination, public-private partnerships, low-cost technology like SODIS, establishment of water resource or awareness centers and educating people at the community level can all make a difference in sustaining human lives through the provision of safe, good quality water through the maintenance of a healthy water ecosystem.