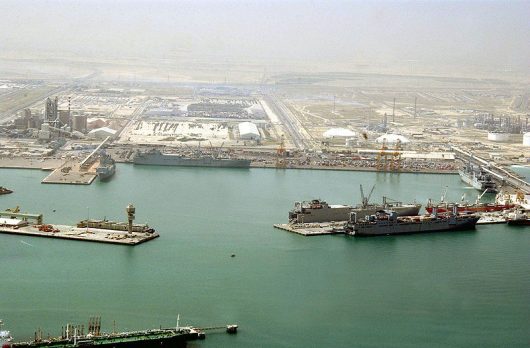 Despite sitting just off the coast of the Persian Gulf, most of Kuwait’s water resources come from groundwater. Although limited rainfall and hot summers in the desert country threaten water reserves in underground aquifers, by using a sophisticated desalinization process, water quality in Kuwait is one of the best.

With Kuwait’s main water supply coming from groundwater, it puts the country at an extremely high water risk: the country only experiences about 121mm of rainfall each year, and only a small percentage of that reaches aquifers. Because of this, the country relies heavily on its desalinated seawater and treated municipal wastewater.

Due to the high risk of contamination and harmful bacteria that harbors in wastewater, between 2005 and 2014, the Kuwaiti government invested approximately $5.2 billion in the water sector. Kuwait allocated around $3.4 billion to water treatments to guarantee adequate water quality in Kuwait.

To ensure that the distillation plants, constructed in 2013, would create enough clean water for the entire country, Khalid Al Barrak, the head of KISR’s Water Science Department, advised the country to monitor and cut down its level of water consumption. Barrak stated that “such a consumption level was irrational and that it was eroding the government’s efforts to prevent the ominous waste of the invaluable resource.”

Barrak’s claims could help protect not only the water quality in Kuwait, but also help preserve the limited natural freshwater resources available in a country, which was recently reported as the highest water consumer in the world. Additionally, cutting down consumption could save the country about $28 million annually.

By cutting down consumption and continuing the construction of desalination projects, the water quality in Kuwait will continue to see improvements and will provide more resources to people who live in the more arid desert areas of Kuwait.