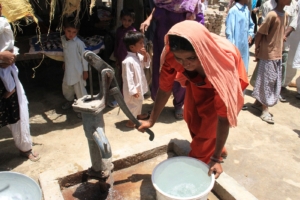 The White House said it views water security as “sustainable access to safe drinking water, sanitation and hygiene services, as well as water to sustain ecosystems and for agriculture, energy and other economic activities.”

The water action plan focuses on three pillars to implement its goals:

While the plan did not specify nations, five countries that need the water action plan especially are Angola, Somalia, Ethiopia, Uganda and Papua New Guinea.

Angola is a southern African country with a population of roughly 35 million. Only about half of Angolans have access to basic sanitation and clean water. In 2020, the U.N. reported that access to both had stagnated, hampering the efforts to achieve SDG 6 by 2030.

Water treatment is just one way to curb malaria and child mortality in the country. Investments from the water action plan could fund water treatment and basic sanitation services, especially in rural areas.

Like Angola, Somalia is on the U.N.’s list of least developed countries (LDC). Clean water and sanitation services are not easily accessible in the eastern African country, as only 32% of the population used a sanitation service in 2020. In a country of roughly 15 million people, this amounts to more than 10 million people without that access.

Somalia is also amid a severe drought. The U.N. estimates that Somalia is heading toward the fourth year in a row without a successful rain season. This has devastated Somalia, with over 100,000 people relocating to find access to water.

The White House highlighted the link between global water security and national security. Somalia is a prime example: In 2014, at the height of its civil war, the terrorist group al-Shabaab used “water terrorism” to further the conflict between the citizens and the Somali government. By cutting off such a crucial resource, tensions flared, and anger toward the government grew, furthering the war.

Somalia could benefit from the water action plan’s funding to expand water access and treatment, which could have a resounding impact.

Somalia’s neighbor to the west shares its water insecure status, as well as being one of 46 LDCs, according to the U.N. Ethiopia has been the focus of foreign aid for decades, stemming from the Ethiopian Civil War in the 1970s.

Still, Ethiopia struggles with sanitation and waterborne illnesses, contributing to child mortality rates. According to UNICEF, the lack of treatment and sanitation of water contributes to 60% to 80% of communicable diseases in Ethiopia. In terms of child mortality, this level of water insecurity leads to 70,000 deaths of children under 5 years of age each year.

Uganda is also on the U.N.’s LDC list. Uganda has stagnated on SDG 6, with only 55.9% of the population having access to drinking water.

Sanitation is one of the critical issues surrounding Uganda’s water crisis. In Uganda, 8.8 million people practice open defecation, contaminating the natural water supply. According to the nonprofit Water.org, 28 million Ugandans lack access to safe sanitation services, which plays a vital role in SDG 6.

Though not on the LDC list, the Sustainable Development Report finds that Papua New Guinea still needs essential water services. Only 45.3% of Papua New Guinea’s citizens have access to clean drinking water, and only 19.2% have access to sanitation services. The U.N. reports that only 30% of the population can access soap and water at home for a hand washing facility.

According to UNICEF, 30% of the population use surface water daily. This likely correlates with illness and poverty among those who contract waterborne diseases.

The White House Action Plan on Global Water Security could help these five countries in desperate need of aid to create stability and health through water and sanitation services. The World Bank estimates that global WASH programs and infrastructure would cost $35 billion to maintain each year, according to a White House report.

While more funding is called for, USAID committed to $1.2 billion in aid for three years to strengthen global water security. The water action plan is a step in the right direction and provides a starting point for these five countries and others to achieve water security.