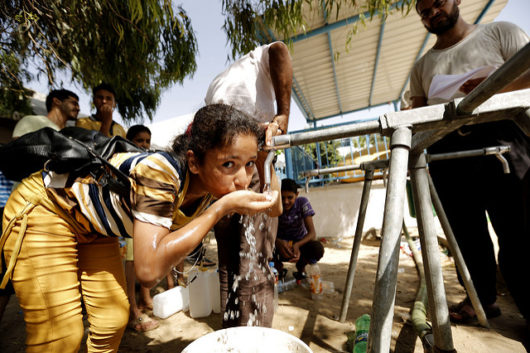 Although access to safe drinking water is a basic human right, many people in Gaza are struggling to find sanitary water. There is an acute water crisis in Gaza, as only one in 10 households has access to safe water sources.  People in this region struggle to find access to a clean and safe water source, only adding to the already bad living conditions in the area. Contaminated water causes severe problems such as disease outbreaks, which can be fatal without proper hygiene tools.

The Water Crisis in Gaza

Experts have estimated that 97 percent of drinking water in Gaza is contaminated by sewage and salt. The regions main source of water is from their coastal aquifer, but the extreme overuse of the aquifer is diminishing its supply at an unprecedented rate. The system has also been contaminated by seawater, meaning that only 4 percent of the water that comes from the aquifer is safe to drink. Water in the region has even become privatized and many families must pay a vendor that owns a private well simply to obtain water. Even when this water is delivered to households, two-thirds of it is already contaminated. On average, around 33 percent of an individual’s income in Gaza goes towards purchasing water.

This water crisis in Gaza not only affects water consumption but hygiene as well. Gaza is only able to have electricity for four to five hours a day, which prohibits sewage pants from being able to treat all of the sewage that comes through. An extreme amount of sewage is pumped back into the ocean in Gaza daily and around 70 percent of the beaches in the region are contaminated. As a result, polluted water is the leading cause of child mortality in Gaza. As aid organizations work to improve access to clean water,  the sanitation crisis can be improved as well.

In January 2017, UNICEF built the largest desalination system in Gaza to provide 75,000 citizens with access to drinking water. Electricity remains a problem in the region, but UNICEF plans to build a large solar panel field to ensure that the plant remains running at full capacity so that it can provide up to 250,000 people with clean water. The organization also partnered with Massachusetts Institute of Technology (MIT) to create a new desalination technique that can make almost 90 percent of water from the aquifer into safe drinking water. The United Nations’ WASH program has also concurred that other steps still need to be taken such as purifying the aquifer and improving rainwater harvesting.

Some experts believe that the region will be uninhabitable by 2020 due to the extreme burden of the water crisis in Gaza. Aid organizations along with the Palestinian Water Authority are aiming to avoid that by planning to build a large sewer network with several desalination plants. Donors have already pledged $500 million to the project. The only problem with the project is the lack of electricity in the region, but officials are claiming that they will soon solve this problem.

Although the water crisis in Gaza has only worsened in the last 20 years, recent aid work in the region provides hope for those who have been struggling to find clean water. As UNICEF and other agencies work to give clean water to the people of Gaza, the privatized water vendors may disappear and the idea of having to purchase largely contaminated water can become a thing of the past for the people of the region.