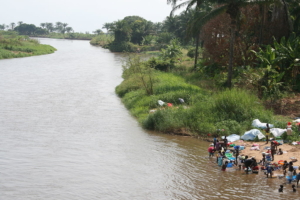 Almost half the population in Angola does not have proper access to clean water according to a report by UNICEF.

A country endowed with some of Africa’s most precious natural resources, Angola is frequently victim to external shocks to the market. Oil accounts for roughly one-third of GDP and more than 95 percent of exports. Reliance on a market like oil, which is particularly prone to shocks, means that Angola’s economy is directly affected by external fluctuations. In fact, growth in GDP continues to fall years after a drop in oil prices in 2014. According to the World Bank, annual GDP growth in 2018 was -2.1 percent.

Water access in Angola is an important metric in understanding the distortionary economic effects felt by low-income individuals, women and children. Without clean water and sanitation, too many Angolans are more prone to water-borne diseases like cholera which can kill someone within hours if left untreated.

Outbreaks are more common in rainy seasons when it is easy for the cholera bacteria to survive. Between February and August of 2018, there were 1,046 cases of cholera in Angola, including 21 deaths.

Programs and Initiatives that Increase Water Access in Angola

The valuation of water is incredibly unique—at high quantities, it is an elastic good, but at low quantities it is inelastic. Simply put, it is a basic resource, so when water is unavailable it also becomes invaluable. Investment in water projects can help Angolans reduce time and money spent on acquiring water—especially from tanker truck services which tend to take advantage of the inelasticity of water during a shortage. A number of global organizations are working to increase water access in Angola in order to help provide people with this basic human right.

From 2016-2017, the Development Grants Program focused specifically on water and sanitation in Angola. It strived to create affordable water options for consumers, and increase the maintenance of infrastructure. Initiatives such as this help local people reliably manage public resources.

The Institutional and Sustainability Support program began in 2015 to support urban water supply and sanitation services. It proposed infrastructure and development goals with the intention of helping 4.5 million people in seven provinces. This program is ongoing and specifically focuses on those provinces with the highest need for water services: Cabinda, Lunda Norte, Lunda Sul, Kuanza Sul, Bengo, Namib and Cunene.

The most recent World Bank project supports inclusive growth, social protection and water services in Angola. One of its 2019 programs, called the Luanda Bita Water Supply Project, invested $500 million to mobilize government financing for clean water access. Another $500 million was given specifically to protect the poor and vulnerable.

This project comes after a 2017 loan of $200 million to provide 950,000 individuals with piped water services and a 2018 investment of $150 million for the 1.2 million people living in regional cities of Angola.

Women and girls are the focus of many of these investments since reducing their time spent collecting water will allow them to give back to the economy in more productive and impactful ways.

Support from these and other global organizations will help Angola to lower the risk of contracting water-borne illnesses, decrease time spent by women and children collecting water and positively impact the overall economy as a result. A basic resource such as water is often taken for granted by people living in countries with reliable water infrastructure. For those living in Angola who spend a disproportionate amount of time and money on safe water, investments in infrastructure and water supply programs are incredibly impactful. Providing the appropriate resources to aid in water access will help Angolans protect themselves from economic shocks, and give back to the global economy.