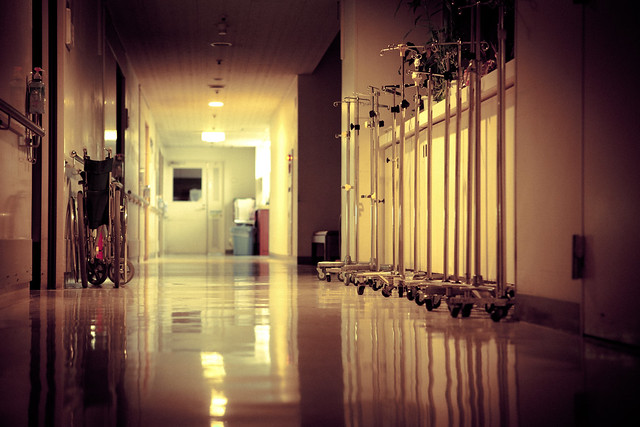 The United States generates over two million tons of wasted medical supplies each year. Facilities do not use many of these supplies such as unexpired medical supplies and equipment. People even throw away completely usable, albeit expired medical supplies. This surplus exists because of hospital cleaning policies, infection prevention guidelines and changes in vendors. Additionally, because equipment must always be ready, replacements are always in order. As such, in the U.K., medical facilities replace equipment before the old versions are out of commission. Waste ranges from medicine to operating gowns, all the way to hospital beds and wheelchairs. Beyond consumables like medicine and one-time supplies like syringes, the need to replace before equipment is sub-optimal leaves a margin for waste on big-ticket items like MRIs.

Many hospitals have dumped their garbage from the reception and operating rooms along with usable medical surplus into incinerators. Although this burning is a source of many pollutants, it is still common practice in many developing countries.

This issue of medical supply waste intertwines deeply with a lack of access to medical equipment in the developing world. While developed countries live in a world of sterile excess, developing countries and remote villages with little access to suitable equipment to meet their needs suffer.

How Does this Waste Relate to Poverty?

People view access to the level of health care service in the developed world as the standard rather than a privilege. In places of poverty like Kivu, Democratic Republic of Congo, facilities are in desperate need of supplies and equipment to treat patients in their region.

Inadequate provisions leave patients on the floor or in out-of-date hospital beds paired with another patient. In the DRC, rape is a common weapon of war. The U.N. Human Rights Security Council passed a resolution that described the problem as “a tactic of war to humiliate, dominate, instill fear in, disperse and/or forcibly relocate civilian members of a community or ethnic group.” Many of the patients at the doorstep of Burhinyi Central Hospital are suffering from rape-related ailments. Some examples are HIV/AIDS, fistulas, bladder and intestinal damage and infections. Without the necessary equipment to handle such cases, impoverished areas, which are already more prone to injury and disease, deteriorate.

How Can it be Fixed?

There are many NGOs like Medshare and Supplies Over Seas (SOS) that follow this process. These nonprofits operate based on collecting, sorting and sending the usable medical surplus to hospitals in need.

SOS has a container shipment program that sends cargo containers filled with medical supplies. These containers would have otherwise ended up in the landfill. A typical container contains six to eight tons. Its medical contents value conservatively at $150,000-$350,000. Since 2014, SOS has shipped containers to 20 countries in need.

A volunteer at Medshare outlined her experience working with surplus medical supplies, saying that, “It was shocking how much waste there actually was. Warehouses full of totally usable stuff all ready to be thrown away.” She added, “[she] sorted through things like syringes and gauze packets which were all put into huge containers for hospitals that need it. It feels like a difference is being made.”

Wasted medical supplies and impoverished areas without access to proper medical equipment are issues that people can resolve simultaneously by salvaging usable supplies and equipment that were ready to go to landfill and sending them to communities in need. Regarding medical waste and poverty, the best solutions occur when those who have more give to those who have less.