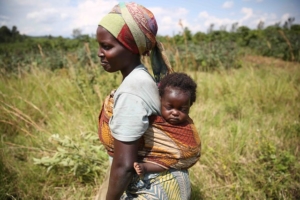 Democratic Republic of the Congo is still attempting to find steady ground after the 2005 end of their five-year war. The U.N.’s most substantial unit of 20,000 soldiers is based in the Congo to oversee and keep the peace.

Unfortunately, a recent breakout of violence in Goma has amplified Democratic Republic of Congo’s hunger crisis and halted the progress that was being made.

The fight, between the Congo and neighboring Rwanda this past November, involved the Rwandan rebels crossing the Congo border and seizing the recent crop from fields and food from the homes of many residents. Numerous homeowners fled and multiplied the already large number of people relocated due to preceding conflicts.

Congo refugees often try to find shelter in areas close to their fields, but are usually forced to leave because of the lack of food and protection. Some find refuge with host families, but those families are usually under pressure to find sources of food as well.

An estimated 130,000 people in Goma are said to have escaped from their homes and farms following November’s attack.

Since 1998, 5.4 million people have died due to hunger in the Congo, war-violence, and disease; approximately 45,000 continually die each month from starvation. War is one of the leading causes of hunger in the Congo, pushing many susceptible populations into even worse conditions. Many “ethnic rivalries” fight for ownership of natural resources and innocent civilians typically endure the backlash.

Due to the large amounts of gold, minerals and diamonds it contains , the Congo should be a wealthy country, but disease, hunger and displacement from wars have caused millions of people to struggle.

Currently 30% of children five and under are suffering from undernutrition and malnourishment, which takes a toll on their immune systems, making them more susceptible to disease, infections and death.

A care group called Food for the Hungry (FH) is using armbands called MUACs to establish if a child is underweight; if the red colored section of the band shows, then the child is considered underweight. This method allows doctors to quickly determine the child’s health condition for the parents, as well as supply the parents with information on how to plan nutrient rich meals, or in some severe instances, recommend hospitalization for children who are dangerously malnourished.

Food for the Hungry trains mothers from communities to be care group leaders so that they are able to continue to educate other women on how to make nutrient rich meals from natural resources and form healthy lifestyles involving increased hygiene and sanitation.

One care group, consisting of 10 care leaders, is able to teach 600 women, which cuts costs without jeopardizing the massive benefits. Multiple women are seeing the rewards of the FH care groups and the impact it has made on the health of their children. Information is quickly passing through villages and transforming the health of hundreds of children and slowly pulling the children suffering from hunger in the Congo out of the red zone.