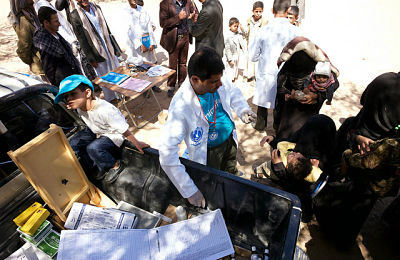 The following diseases are most prevalent among individuals who have been externally and internally displaced:

Consequently, UNICEF is conducting localized vaccination campaigns and nutrition surveillance initiatives to address malnutrition. The World Health Organization (WHO) is working alongside health authorities and other partners to swiftly respond to the risks posed by life-threatening diseases in war-torn countries. Under the WHO, the Early Warning Alert and Response System (EWARS) is aiding in the training of health personnel and surveillance officers. It also assists with the effective detection of massive disease outbreaks.

Cholera
Cholera is growing very common in South Sudan. The Vibrio cholerae bacterium produces a distinct toxin that poisons cells. Once this condition aggravates, it is difficult to absorb water from the gastrointestinal tract. This results in the secretion of large volumes of water.

Malaria
Malaria is becoming especially common among refugee camps along the Turkish-Syria border and many parts of Pakistan. It can culminate in the complete collapse of the body systems. Additionally, children are especially susceptible to this illness.

China has recently transported over 500,000 anti-malaria drugs to South Sudan to combat the threat of malaria. Over 400,000 individuals will benefit from this.

Polio
This disease is still endemic in countries like Nigeria, Pakistan and Afghanistan. Polio results in weaknesses in the muscles of the legs and diaphragm and paralysis. Immunization coverage is also quite poor in these places.

However, the Gavi Alliance board is supporting the Inactivated Polio Vaccine (IPV) as a way of addressing the humanitarian emergency it poses to refugees and vulnerable civilians. With the help of the Gavi initiative, immunization programs will become more routine and efficient in combatting such diseases in war-torn countries. The cost to extend the project until 2020 is over $250 million. The Bill and Melinda Gates Foundation, the Global Polio Eradication Initiative (GPEI) and the U.K. Department for International Development (DFID) currently spearhead the project.

Hepatitis E
This particular infection is essentially a liver disease and is caused by the HEV virus due to the consumption of contaminated food and water. The disease passes through the fecal-oral route. Hepatitis E impacts over 20 million individuals worldwide every year. The WHO’s Strategic Advisory Group of Experts (SAGE) on immunization has been reviewing the state of the disease and the immunogenicity of the vaccine since 2015.

Measles
An estimated of 2.6 million children under the age of 15 are at risk of contracting the disease in Yemen. The majority of women and children have not received vaccinations for more than 2 years. Also known as rubeola, measles can become very ubiquitous during periods of mass-displacement. It is an infectious and contagious disease that results in high fever and challenges to the respiratory system. The current lack of vaccination and immunization schemes is debilitating.

The Global Measles and Rubella Strategic Plan is a 10-year initiative conducted by the WHO and World Health Assembly from 2012 to 2020. It aims to ensure the control and elimination of measles.

Overall, it is vital to counter the risk of diseases in war-torn countries from becoming endemics in refugee camps and war-torn areas. Due to the close proximity in which people live in these zones, diseases and infections can become very widespread. But the current collaborative efforts undertaken by nonprofit and international organizations will go a long way in alleviating the problem. 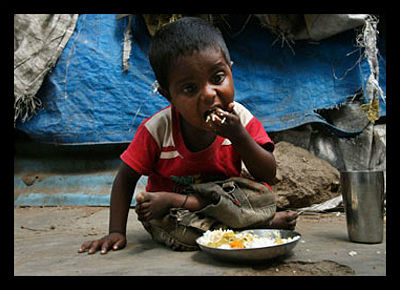 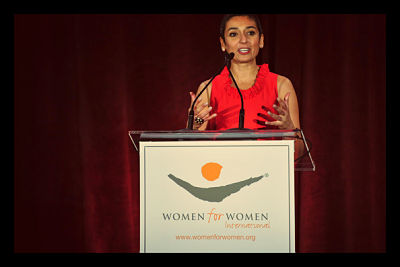 This is a global humanitarian Zainab Salbi. She is an Iraqi-born humanitarian that founded the organization Women for Women International. Salbi has dedicated the majority of her life to helping women in war-torn countries rebuild their lives and their communities. Growing up, her father was Saddam Hussein’s personal pilot and her family was firmly in the clutches of Hussein’s inner circle. After an unsuccessful arranged marriage in America to avoid the clasp of Hussein, Zainab remarried and founded Women for Women International.

In 1993 the news of rapes in concentration camps during the conflict in Bosnia propelled Salbi to found an organization to help female victims of war. The organization provides economic aid, emotional support, job skills training, and rights education to empower women and stop the cycle of violence.

Women for Women International currently works in eight war-torn countries. The organization provides a one-year program for women to receive job and business training, enabling them to earn a living. This program helps women understand their rights and liberties and provides them with the opportunity to become leaders in their communities.

Women for Women International has mobilized more than 300,000 people in 185 countries to support female victims of war. Their support has provided assistance to more than 351,000 women through education, microfinance programs, and small business development, as well as other initiatives. Women for Women International has been able to distribute $108 million in direct aid to women.

Women for Women International works in four modules. They aim to help women sustain incomes, be aware of their rights, be educated as family and community decision-makers, and provide them with social networks and safety nets for support.

Zainab Salbi has founded a massively successful and vitally important international aid organization. Women for Women International places female empowerment and recovery at the center of its philosophy to create positive social change in the world.