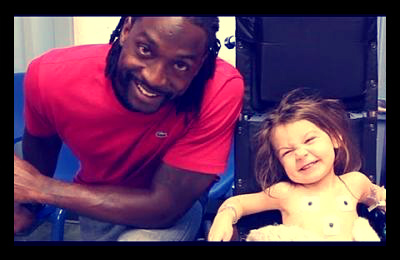 Walter Payton is affectionately remembered as “Sweetness.” The nickname for the Pro Football Hall of Fame running back refers to the seemingly effortless way he glided across the field as he ran. Although most recognized for his gridiron achievements in his 13-year NFL career with the Chicago Bears, the NFL officially recognizes him for his renowned charity.

The Walter Payton NFL Man of the Year Award is given annually to the player who most exemplifies Payton’s humanitarian and charitable ideals. Payton worked tirelessly both during and after his career to help support abused, neglected and underprivileged children through the Walter and Connie Payton Foundation. To this day, the Foundation supports these at-risk children through school fundraisers in low-income districts as well as through the annual Sweetness Run, which helps promote cancer and organ donor awareness.

For the 2013-2014 season, the winner of the Walter Payton Award is fellow Chicago Bear Charles Tillman. Known as “Peanut,” Tillman received the honor for his work with the Charles Tillman Cornerstone Foundation. Dedicated to providing financial and emotional support for economically challenged families living in the Chicago area, Tillman’s Fund has raised over $1 million.

Peanut is also invested in promoting global education. Tillman and his wife, Jackie, recently helped to build a school in Cambodia. Additionally, Tillman has partnered with Urban Promise, a non-profit education organization based in Camden, New Jersey, to help children worldwide secure quality access to education.

“This is No. 1,” said Tillman upon receiving the award from NFL Commissioner Roger Goddell. “I couldn’t even talk. I can talk about going to Super Bowls, and creating turnovers, and forcing fumbles, getting picks, getting touchdowns. But I’ve never been so nervous in my life to get on stage and talk in front of so many people with so much passion about what I do.”

Much like Sweetness before him, Tillman excels at balancing his exceptional football skills with a dedication to off-the-field giving. Tillman is a wonderful figure of social responsibility for young and aspiring athletes.