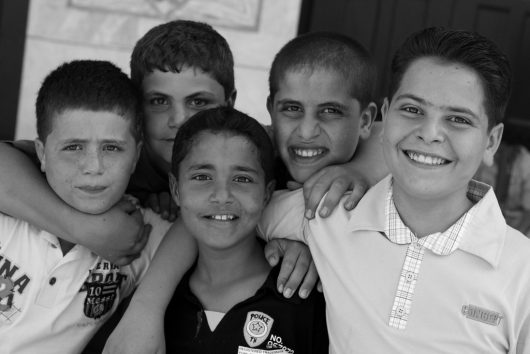 On December 22, 2015, water lines in the rebel-held region of the Wadi Barada valley, northwest of the capital, were severed as a result of the Syrian conflict, with each side trading blame. The Wadi Barada and Ain al-Fija springs provide water to 70% of the population of the city, and as time stretches on, almost all 5.5 million residents are now affected by the ongoing water crisis in Damascus.

The conflict, which has continued for more than six years and displaced half of Syria’s original population of 22 million, has also killed hundreds of thousands of people.

Syrian officials have alleged that rebels contaminated the water supply with diesel fuel, forcing the government to sever lines – a claim refuted by rebel groups.

The shortage has sent people clambering for supplies, as families constantly find themselves in a desperate search for water. In some areas, distributed rations are limited to as few as five gallons per household. Some residents receive nothing and must resort to purchasing water from private sources, a solution that includes the risk of contamination, unknown quality and obscenely inflated prices.

UNICEF has since warned that the threat of waterborne diseases is now incredibly high in the area and poses a specific threat to children, who also bear much of the burden when it comes to collecting water for their families.

In the following weeks, the United Nations has strongly condemned the water shortage, noting that “to sabotage and deny water is, of course, a war crime, because it is civilians who drink it and civilians who will be affected by waterborne diseases.” Without acknowledging blame, the U.N. has identified the problem as the deliberate destruction of the Wadi Barada infrastructure.

Many residents are relying on creativity and resourcefulness as they endure the water crisis in Damascus, with some jury-rigging spouts to park fountains that run off artesian wells, and others selling water door-to-door from previous water-based businesses such as car washes.

Amid the crisis, UNICEF stepped in to help ease the struggle of those seeking the most precious of resources by aiding in the repair of 120 wells. They have also furnished water to 89 schools that provide safety to more than 30,000 Syrian children.

Reports on January 13, 2016, indicated the imminent arrival of Syrian government workers to begin restoring the pipeline. Local governor to Damascus, Alaa Ibrahim, was hopeful in an address from the Wadi Barada valley, stating that water would hopefully be restored within three days, and claiming peace talks had begun with rebel forces there.

A concrete resolution to this humanitarian crisis is yet to be seen, but residents of the city remain hopeful that repairs will be completed quickly. Despite an impending end, the water crisis in Damascus has served as a reminder of the plight of millions of Syrians as they seek safety and some semblance of normalcy in their lives amid the chaos.