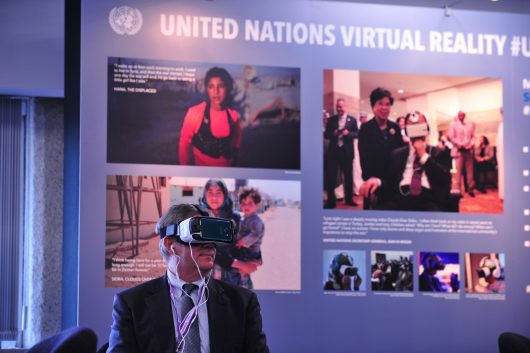 Virtual reality technology is such a recent phenomenon that we have only just tapped into its potential. This technology has been used to expand the capabilities of film and video games, to train soldiers and surgeons, to assist space missions and to aid patients in physical and mental therapy. Non-governmental organizations have found another use for it; now virtual reality is fighting global poverty.

One of the first major forays into using virtual reality to fight global poverty when the U.N. showed a film called “Clouds Over Sidra” which puts the viewer in a Syrian refugee camp in Jordan. The viewer is given a tour by a twelve-year-old girl named Sidra, who explains what her life is like at the camp.

The U.N. has shown this film and others through virtual reality headsets to potential donors at humanitarian fundraising events. These films have seemingly become a hit. At a March humanitarian pledging conference where donors viewed “Clouds Over Sidra,” $3.8 billion was donated to aiding Syrian refugees, well beyond the conference’s goal of $2.3 billion. In New Zealand, one out of six people who saw the film chose to donate, which was twice the normal donation rate.

A major reason why virtual reality is fighting global poverty so effectively is its ability to elicit empathy from viewers. In a 2013 experiment from Stanford University and the University of Georgia, two groups did a color-matching exercise in virtual reality, where one group pretended to be colorblind and the other group was forced into colorblindness through a filter. The study found that the second group spent twice as much time helping colorblind people than the first group. Similar experiments found that people who saw 65-year-old virtual avatars of themselves were more likely to save for retirement, and people who cut down a tree in a simulator used fewer napkins than people who read a description of what happens when a tree is cut down.

The intense, empathetic reactions to VR films have not been lost on VR film producers such as Robert Holzer, CEO of Matter Unlimited. “I’ve never experienced such a visceral reaction to any form of media,” says Holzer. “People are left with something closer to what a memory is, versus what they are left with when it is something that they just watched, and that to me is the wild difference of VR.”