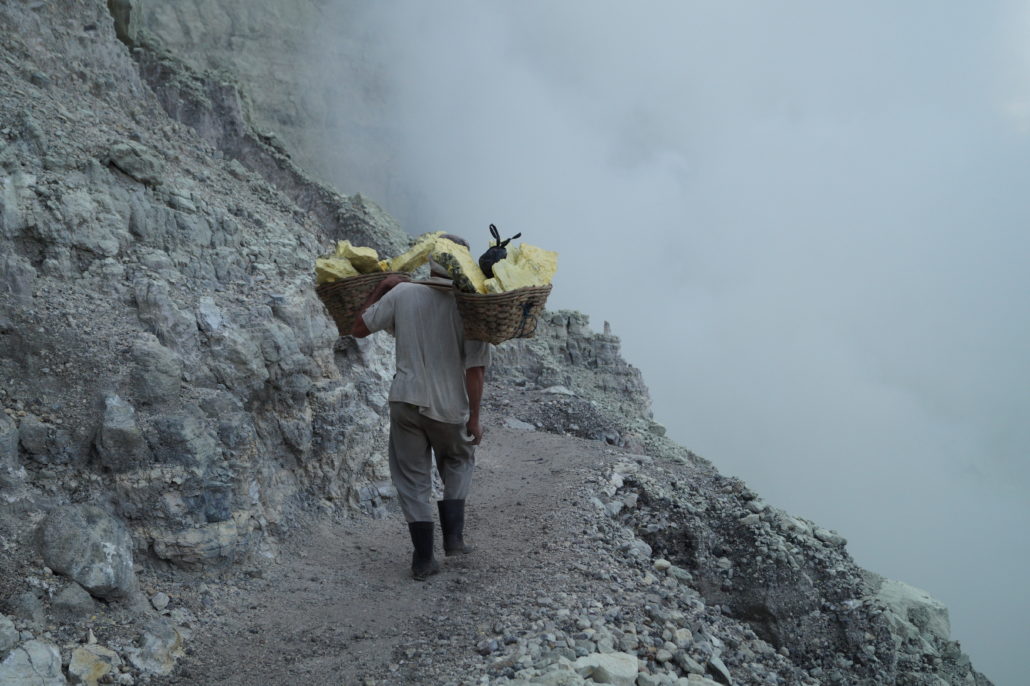 In Indonesia, 9,000 feet above sea level, on the Kawah Ijen volcano crater, one can see two kinds of people: sulfur miners suffering backbreaking labor in toxic conditions, and tourists wealthy enough to afford gas masks and enjoy the rugged beauty of the landscape.

The miners are locals of the region. They trek up the steep cliffs, carrying 80 kilograms of sulfur per trip for compensation of about 7 cents per kilogram. PT Candi Ngrimi employs them and processes the sulfur into powder, slabs and granules for sale to manufacturing companies. In particular, sugar processing companies use sulfur to refine and whiten sugar crystals.

Despite working next to the most acidic lake in the world and within the toxic fumes of the volcano, the workers have virtually no equipment to protect themselves from hazards. Most wear only a thin piece of cloth over their nose and mouth.

Unlike the miners, who have been active since 1954, the tourists at Kawah Ijen are a new addition to the volcano. East Java was rather obscure until 2010. Then, Abdullah Azwar Anas became regent of the Banyuwangi Regency (the city in which the volcano is located). Upon his election, Azwar developed fervent promotions for tourism, and now millions of people visit Banyuwangi yearly.

The economic impact of tourism is immense for many countries around the world. For instance, Maldives has shifted from a least developed to a developing country largely because of tourism, which is the dominant economic sector for that country.

Tourism is a growing economic force for Indonesia, too, as it accounts for 5.2% of GDP and 3.7% of total employment. Tourists at Kawah Ijen create the potential for public and private sector cooperation. This relationship could build infrastructure to support tourism, ultimately increasing employment and income.

Tourist attractions like the Kawah Ijen crater rely on the environmental and cultural health of the area. Thus, the governments and corporations in Banyuwangi have the motivation to preserve these aspects. Although there may be increased infrastructure development in the area, it is unlikely that there will be large-scale changes that would alter the natural and cultural beauty of Banyuwangi.

The primary concern of tourism at Kawah Ijen is that the sulfur miners become an attraction, much like the alluring blue fire, yellow sulfur and acidic lake of the volcano’s crater. Tourists reflect this concern by taking selfies with miners who are about to begin their trek back to base for their daily $5. Despite their popularity, the miners have not seen any monetary rewards during Banyuwangi’s tourism boom, barring small fees for photographs. Their wages remain as they have for decades.

Tourists at Kawah Ijen are not an inherently bad thing, of course. However, the sulfur miners are a big reason that the volcano is a tourist attraction at all, yet they continue to live in poverty. It is an extreme example of exploitation without compensation.

So popular is the hardship of the sulfur miners’ lives that they are documented on a database of “dark tourism.” Dark tourism, according to the website, is “travel to sites that are in some way connected to death or disaster.” Kawah Ijen received a 10/10 on its “dark-o-meter” rating, alongside memorials to the Hiroshima bombing and the Rwandan genocide.

How to Ensure Positive Development

One example of this is voluntourism, which melds volunteer service work with tourism. Tourists could plant trees resistant to sea-level rise on the coast of East Java. They could help build a road to make the miners’ travels easier. Voluntourism, however, is a potentially deleterious activity that can strip local communities of their agency. If implemented at Kawah Ijen, officials would have to monitor voluntourism with extreme caution and attention to detail.

Another example is pro-poor tourism, which aims to create a net benefit for impoverished communities in host countries. This often takes the form of governments or private companies training impoverished populations to take part in the tourist industry, perhaps as a travel guide or an education specialist.

Because of tourism’s growing economic importance in Banyuwangi, tourists themselves have indirect political power in the region. Considering this, tourists at Kawah Ijen have an opportunity to become activists. If they demanded that miners received just compensation for their work, the regency or PT Cambri Ngimri may oblige. This is called justice tourism, and although it may seem idealistic, it could produce a serious change in places like Kawah Ijen, if it were done correctly.

Sublime photos of Kawah Ijen’s sulfur mines and blue fire continue to circulate on the internet. It is clear that the volcano’s popularity is not dwindling. Governments and companies, then, should try and discover ways to make tourism socially sustainable. This practice is necessary not just in Indonesia, but in any place that is worth visiting and celebrating. 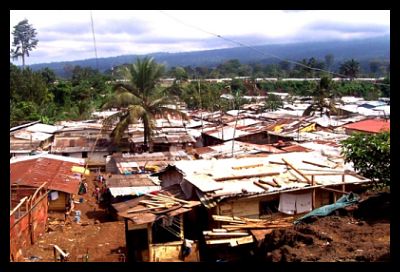 In 2013, Equatorial Guinea donated $30 million to fight hunger in Africa. Truthfully though, that donation may have been partly inspired by self-interest. Located west of Central Africa itself, the tiny nation is dwarfed in reputation by its northern compatriot Guinea. Below are five other reasons people are hungry in large swaths of its population.

Many Americans are culturally illiterate when it comes to Africa as a whole. They do not know how many countries there are, much less the individual distinctions between those countries. When casually asked about the location of the 2010 World Cup, most of them shrug and reply, “Africa.” What follows is a fair amount of “voluntourism,” our second reason.

“An act carried out by … hoards of … the great unwashed backpacker brigade descend on a place to do have a jolly nice holiday—usually at precious little cost to themselves—and do the occasional bit of good work.” The Urban Dictionary definition says it all. Voluntourists seldom go to Africa because they are dedicated to ending the suffering of African women or children. Instead, it’s become a social rite of passage and a booster for résumés and college applications.

Lauren Kascak—a three-time, self-admitted voluntourist herself—asserts, “Voluntourism is ultimately about the fulfillment of the volunteers themselves, not necessarily what they bring to the communities they visit … In Ghana … local people weren’t purchasing health insurance, since they knew there would be free foreign health care and medications available every few months. This left them vulnerable in the intervening times, not to mention when the organization would leave the community.”

Closely related to voluntourism, many people who do come to Equatorial Guinea with a helpful mindset end up not helping in ways that have lasting impacts. It is said that if a man is given fish, he will only have food for one day. Many altruists are, sometimes literally, the fish-givers. For this reason, it cannot be stressed enough the importance of diversifying aid beyond handouts and freebies. Otherwise, the very “Others” whom altruists try to help become dependent upon the latter’s aid, eventually stunting economic growth on a grand scale.

4. The Paradox of Plenty

Equatorial Guinea is not a poster child nation of poverty; it struck oil in 1995 and is now perceived as relatively wealthy. However, its people remain stuck in poverty because the government also has misplaced priorities. While it has increased the annual amount spent on public works, less than half of Equatorial Guinea’s population has access to clean drinking water. Its child mortality rate remains near 10 percent. Why? That brings us to point five.

Ahh, the old C-word is back. The leaders of Equatorial Guinea, since its independence in 1968, have ruled over the small country with a dictatorial, terroristic mindset. Its first leader following independence was Francisco Macias Nguema: a dictator who ordered the deaths of thousands of opponents, including some of his own family members. He remains known as “one of the most kleptocratic, corrupt, and dictatorial leaders in post-colonial African history.” His successor and nephew, Teodoro Mbasogo, may not be much better. Mbasogo may not be connected to a possible Bubi genocide, but Human Rights Watch maintains that he has used the oil boom to carry on the kleptocracy that his predecessor instituted.