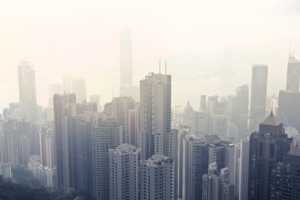 China has one of the world’s fastest-growing economies. With an annual GDP of over $12.34 trillion in 2017, China is the second-largest economy in the world behind the U.S., which has an annual 2017 GDP at over $19 trillion. While China’s economy may be growing rapidly, and possibly on the verge of passing the U.S. within the next decade or so, economic growth has come at a significant cost including severe smog.

China has relied extensively on fossil fuels for new manufacturing and power production facilities. The expansion of manufacturing facilities, combined with poor regulations, has led to serious smog problems in Chinese cities, especially in Beijing. Now, the Chinese government is acknowledging the negative health impacts of extreme smog production after ignoring it for years.

Smog is severe air pollution that looks like a thick fog. The most common form of smog is photochemical smog. Photochemical smog forms when sunlight reacts with nitrogen oxides and volatile organic compounds (VOCs) in the atmosphere. Nitrous oxides commonly release into the atmosphere through burning fossil fuels and factory emissions. VOCs commonly release into the atmosphere by paints and cleaning products. The end product of this chemical reaction creates a thick, brownish fog that can be unhealthy for humans, plants and animals.

Coal-burning facilities are the number one culprit behind Beijing’s severe smog. Since China opened up to the world for trade in the 1970s, the nation has become a manufacturing-based economy. This is because Chinese workers receive little pay to manufacture products compared to what companies would have to pay in other countries. On top of that, Chinese products tend to be much cheaper to produce.

Beijing has become a major example of poor air quality due to the significant increase of coal-burning facilities. It also has a large number of vehicles on roadways along with unique topography.

Besides severe smog being unaesthetic and producing a thick, brown fog, it also has serious health impacts for humans, plants and animals. Beijing’s smog can cause short-term health problems such as heart attacks, asthma attacks and bronchitis. Thick smog can even lead to increased traffic accidents from poor visibility. Over the long-term, smog contributes to serious conditions such as respiratory failure and even cancer. To make things even worse, nearly one million Chinese residents died in 2012 because of smog-related diseases, the most out of any country in the world.

“These pollutants are understood to affect human health in several ways, but most importantly they have been observed to cause people to die prematurely,” said Jason West, a professor for the Department of Environmental Sciences and Engineering at UNC-Chapel Hill. “When we breathe, pollutants in the air can react with our airways and the surfaces of our lungs, and some pollutants like PM2.5 can enter the bloodstream and circulate throughout the body.”

How China is Alleviating Smog

Before China’s Academy for Environmental Planning pledged $277 billion to combat urban air pollution, smog conditions throughout Chinese cities were severe. There were concerns about the 2008 Summer Olympics, which were held in Beijing, over severe smog issues. In December 2016, Beijing had to close down schools and airports because of severe air quality problems.

Furthermore, most residents have to wear masks in efforts to reduce the amount of unhealthy particle matter being trapped in their lungs. However, since 2013, nearly four million homes in the northern parts of China have converted to natural gas, a cleaner alternative than burning coal.

The average amount of unhealthy air particles that can penetrate the lungs and cause health problems has fallen in urban areas. Between 2016 and 2017, the concentration of negative air particles fell to 43 micrograms per cubic meter, a 6 percent decrease but much higher than the World Health Organization’s maximum recommended concentration 25 micrograms per cubic meter over a 24 hour period. The Chinese government has also released a new Three-Year Action Plan in 2018. By 2020, the plan hopes to decrease sulfur dioxide and nitrous oxides by 15 percent.

Nongovernmental organizations (NGOs) throughout China are also helping to combat severe smog issues. Most of China’s NGOs such as the Center for Legal Assistance to Pollution Victims (CLAPV) are concerned with legal actions against smog polluters. CLAPV has helped over 10,000 people via the phone and has pursued over 100 legal cases.

With negative health consequences such as respiratory problems developing because of smog, many residents have long-term health problems. Therefore, NGOs provide outlets for helping Chinese citizens sue polluters for damages, which in the long run, helps to alleviate severe smog issues.

Chinese smog is certainly a problem, and cities such as Beijing and Hong Kong feel the effects. Although smog may be a problem, there are solutions that will greatly reduce its negative health consequences. American companies such as Apple are investing millions of dollars in renewable energy projects in China, which reduces fossil fuel consumption, leading to reduced smog. The Chinese government’s Three-Year Action Plan shows promise, and the U.N. has already found that unhealthy particle matter has decreased throughout Chinese cities, although there is still work to do.