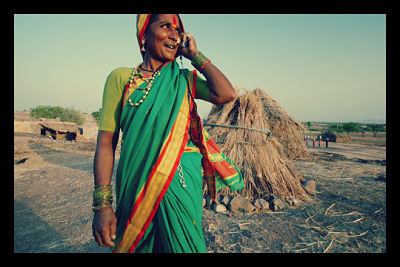 SEWA collaborated with the Cherie Blair Foundation for Women and Vodafone India to create a mobile phone application that allows these saleswomen to place orders through text messages on the low-tech mobile phones that they were already using.  This saves these women the time they used to spend placing orders and allows them to make more sales, which has drastically increased their profits.  One saleswoman saw her income increase from 250 rupees to 5,000 rupees a day.

Empowering these women in such a way can lift whole communities out of poverty.  Women, unlike men, are likely to invest about 90 percent of their income back into their own communities, thereby contributing to economic growth within the area.  According to the Global Poverty Project, women also makeup nearly 70 percent of the world’s 1 billion poorest people, and produce half of the world’s food.  As former UN Secretary-General Kofi Annan put it:  “there is no tool for development more effective than the empowerment of women.”