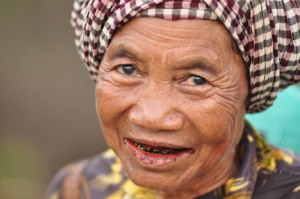 Recently, activist groups in the U.S. have brought attention to a staggering problem: the increasing number of missing or murdered indigenous women and girls. Violence against indigenous women and girls does not only occur in the U.S. Native women all around the world also find themselves trapped in the margins of justice, vulnerable to various forms of violence. This article will consider three common threads that perpetuate these patterns and the initiatives taken to stop them.

Due to centuries of displacement and disenfranchisement that nation-state expansion caused, many indigenous communities around the world have limited access to economic opportunity. As a result, indigenous women must often work in highly exploitative labor, which can take the form of slavery and/or human trafficking.

In Nepal, girls of Tharu origin or Kamlaris frequently find themselves in a coordinated system of bondage. While the Nepal government prohibited this system in 2000, the economic scarcity that some Tharu families face allows for this exploitation to survive, according to the Asian Indigenous Women’s Network.

Violence against indigenous women takes the form of debt bondage in several other Asian countries. Cases have popped up in China, Cambodia, Myanmar, Thailand and other countries in the region. In Latin America, economic exploitation is a detriment to the well-being of indigenous women and girls, with life-threatening child labor forced upon many native communities.

Land-grabbing for economic or political reasons threatens many indigenous communities around the world. In many cases, this weakens the solidarity instrumental in ensuring the well-being of community members, leaving women and girls more vulnerable. Seventy-six percent of people living on tribal land and 96 percent of perpetrators of sexual violence against indigenous women in the U.S., for example, are of non-native identity.

In Asia-Pacific countries, the appropriation of land for private or public use met with resistance and has led to the increased terrorization of indigenous communities, according to the U.N. The military forces of the Philippines, Myanmar, Papua New Guinea and Fiji have all used rape and murder of women and girls as a war tactic.

Combating the multifaceted forms of violence against indigenous women and girls is a tall task; political negligence of the problem makes it even harder.

Consider one particularly harmful U.S. policy which states that tribes do not have legal jurisdiction over criminal acts that nonmembers commit. In 2013, this law changed to allow prosecution in cases of domestic violence, but sexual assault and trafficking crimes still lie outside tribes’ legal power. Of course, the federal level could try these crimes, but law enforcement often fails to respond in an adequate or timely manner. Even in urban settings, nearly a third of perpetrators of violence against indigenous women do not receive justice in the U.S., according to the Urban Indian Health Institute.

There is a similar dynamic playing out in New Zealand, where Maori women often face discrimination. If they bring a complaint to the government, it may not be fruitful, as “[t]he government has a poor record of recognizing and protecting Maori rights and interests generally,” says indigenous legal scholar Kerensa Johnston.

To address violence against indigenous women and girls, two different types of solutions are necessary. First, governments must implement immediate-relief policies: the U.N. notes that many countries have invested in support services for women and girls affected by violence and in awareness campaigns to prevent violence from even occurring. Policies can also work to improve data collection to ensure that fewer cases go unaddressed; Washington state just passed a bill with this aim.

As the U.N. warns, however, solving this problem will require more than tinkering around the edges. Histories of inequities make justice elusive, putting native women and girls at a higher risk for gender-based violence. The U.N. report suggests that communities and countries will find a path forward only once they recognize this history.