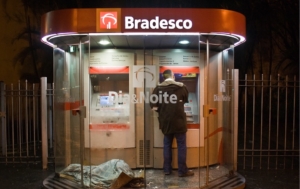 The founders of Invisible Sao Paulo are Vincius Lima, 18, and Andre Soler, 21. Lima says the purpose of the project is to “open people’s eyes, and show them that people who live on the streets are human beings as well, that they have a story and they deserve respect and dignity.”

The Facebook page features a picture of one homeless person and a transcript of their story everyday. There are hundreds of stories on the page, ranging from horrific to heart wrenching, to humorous and to hopeful. The stories are diverse and unique, emphasizing the purpose of the project: to make the homeless seem more human.

One of the stories is that of Pedro Henrique, who is 33 years old. He grew up without a mother and father and has been on the streets for 20 years. He says, “Eu não nasci pra ser triste, faço de tudo pra ser feliz, mesmo morando na rua” or “I was not born to be sad, I do everything to be happy, even living on the street.” He carries a broken video camera with him because he says it makes him happy and reminds him of his time in Rio, when he shot films of skaters and surfers.

The project hopes to change the attitudes of people living in Sao Paulo toward the ever-growing homeless population. One resident of Sao Paulo, Luan Drezza, says that Invisible Sao Paulo “humanises people who we would have kept our distance from.” The Facebook page was set up to mimic Humans of New York, a project that shows stories of New Yorkers everyday.

There are an estimated 15,000 homeless in Sao Paulo, most likely the highest population of homeless in Brazil. Half of those are in shelters, but the rest are on the streets. Homelessness is also a problem in other urban areas in Brazil, mostly Rio de Janiero. A similar Facebook page, Invisible Rio, has started with the same purpose as Invisible Sao Paulo and has attracted a lot of attention in the city.

Homelessness in Brazil was highlighted during the FIFA World Cup this summer, when thousands of homeless in Sao Paulo protested their forced removal from buildings around the city and the expenditures the Brazilian government had taken on to build infrastructure for the event.

A group called Movimento do Trabalhadores Sem Teto, or MTST, helped and participated in the protests. They, along with other protesters, say that without them, all the outside world would see of Brazil was FIFA. MTST is a social organization founded originally to speak for landless rural peasants in 1997; it now focuses purely on urban homelessness in Brazil.

Brazil is also the host of the 2016 Olympic Games, which is predicted to cause more social protests.