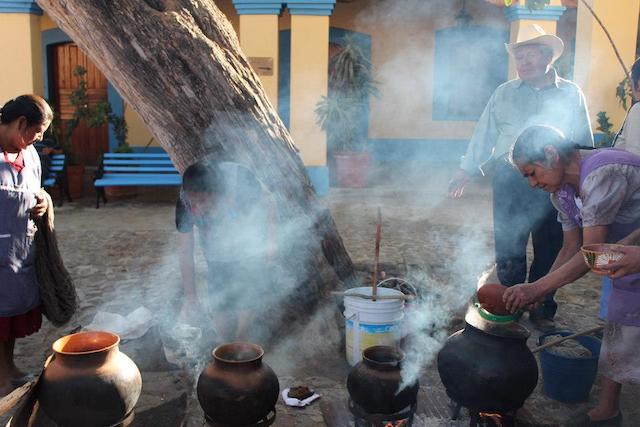 Female weaving co-ops began to proliferate in Mexico in the late 20th century, especially in the country’s most impoverished areas. Indigenous Mexican women living in these areas found it imperative to collectivize to navigate an oppressive socio-political landscape. Vida Nueva is one example of a co-op that grew out of this context. This female weaving co-op promotes gender equality in Mexico in ways that people never before imagined.

How This Female Weaving Co-op Promotes Gender Equality in Mexico

Oaxaca is the second-poorest state in Mexico, with historically low GDP growth relative to the national average. In Oaxaca, 28 percent of the population lives in extreme poverty, a statistic due mainly to income disparities between rural and urban centers and the region’s low manufacturing capacity. In the small township of Teotitlán del Valle, Zapotec women feel social and economic marginalization the hardest, because they must contend with a communal infrastructure that favors men and limits their participation in municipal government. Until the 1990s, women could not pursue education or obtain a drivers’ license.

Today, many Zapotec women are still illiterate and bound to male intermediaries so they may engage meaningfully with the economy. This is especially the case regarding the textile industry, their principal export. Under these conditions, even their own reproductive health can present a source of ignorance.

Weaving Cooperatives as a Means of Social Change

The establishment of weaving cooperatives has benefitted Zapotec communities like Teotitlán in confronting the onset of globalization and neoliberal economics in Mexico. This phenomenon has proven to be damning to rural indigenous communities throughout the country. However, the biggest impact changes in textile production have been in improving gender relations in otherwise patriarchal contexts.

Since Zapotec women began weaving, their stake in local politics has increased, as well as their lobbying ability. Exposure to new markets through access to technology and travel has led to instances of financial and ideological independence. They have placed new importance on education and female empowerment, reshaping social norms to value female labor and domestic contributions at home.

Vida Nueva (New Life in Spanish) is an all-female weaving cooperative changing the social geography for women in Teotitlán for the better. The group comprises of solteras or unmarried women, widows and the wives of migrants, who banded together in an attempt to circumvent merchant control over their products. When starting, the women struggled to sell their rugs independently due to a language barrier (most do not speak any Spanish), stigmas against indigenous Mexicans in the city, exploitative bureaucracy and male backlash within their community.

A chance encounter with Flor Cervantes, a social justice promoter in Oaxaca with over eight years of self-esteem workshops under her guidance, gave Vida Nueva the architecture to develop into what it is now. Under Cervantes’ guidance, the women learned about their bodies, their business potential and how best to advocate for themselves. With this knowledge, Vida Nueva began to expand. It eventually gained recognition from the United Nations and the licensure to sell its goods worldwide. Through education and cooperative production, Vida Nueva regained control over the production and sale of its work.

While Vida Nueva’s biggest impact on gender equality in Mexico is qualitative, concrete change also exists. By 2004, nearly 15 percent of households in Teotitlán participated in textile cooperatives. This is a considerable increase since Vida Nueva’s inception in 1996.

According to the New York Times’ measure last year, the textile industry involves almost all of Teotitlán’s 5,500 residents in some way. Since the early 2000s, higher volumes of female co-op members received invitations to attend community assemblies. Now, it is commonplace for whole collectives to receive written invitations. This serves as evidence that a once-rigis, patriarchal local government is finding women to be more valued assets.

At no point in becoming independent artisans did the women of Vida Nueva compromise their practice. They continue to use the natural dyes (made from pomegranate, marigolds, pulverized insects, etc.) and the arduous weaving techniques that predated colonization. Vida Nueva is a community-driven project with a localized vision. Every year, the collective sponsors a new initiative to improve the quality of life in Teotitlán for all residents. Since starting, the group has championed recycling and forestation efforts, senior care services and feminism.