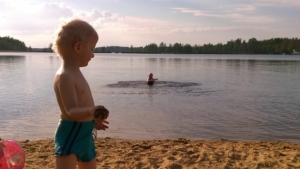 Kankaanpää, a small town in Western Finland, is using sand to store heat from renewable energy sources to provide homes with better and more cost-effective heating during winter. Finland’s sand battery is the first of its kind to be fully functional and comprises thousands of cubic meters of sand. The sand battery may replace some of the energy drawn from the power grid and provide heating throughout the five-month-long Finnish winters.

Polar Night Energy developed this sand battery and installed it at a power plant site that Vatajankoski, a green energy supplier in Kankaanpää, Finland, operates. It consists of a “4 x 7-meter steel container” that holds hundreds of tons of sand. Using renewable energy, the sand heats to about 500 degrees Celsius before it is “stored for use in the local district heating system,” said Energy Storage News.

The battery uses builder’s sand, which is a kind of rough and ready grain that stands as a cost-efficient power storing apparatus during times of need. The sand itself is heated using green, renewable power, mainly solar panels and wind turbines. The sand battery will bring the citizens of Kankaanpää, and soon all Finns, a better, greener, more cost-effective heating system, especially now that the war in Ukraine is affecting the importing of gas and electricity.

The Impact of Russia’s Halt on Energy Supplies

In a 2020 poll asking Finns about heating costs, 38% of Finnish consumers said their household’s heating costs represent a noteworthy economic difficulty and many other consumers reported “compromising their living comfort to save money on heating.” More so, most of Finland’s gas and energy comes via imports from the surrounding countries, mainly Russia. However, in May 2022, Russia halted both its gas and electricity supplies to Finland.

The first halt of the electricity supply came shortly after Western nations imposed sanctions on Russia due to Russia’s invasion of Ukraine. After these sanctions, Russia declared that all “unfriendly” countries wanting to continue receiving supplies of electricity and gas from Russia would have to pay using the Russian ruble, “a move the EU considers blackmail,” said the BBC.

As Finland deliberated joining NATO, Russia halted the supply of electricity to Finland and even threatened retaliatory action if Finland applies to join NATO. Then, on May 21, 2022, after Finland applied to join NATO, the Russian energy utility Gazprom affirmed it fully terminated any exports of goods to Finland. This halt also came after payment disagreements between the two countries due to Finland declining to make payments for gas in Russian currency.

Thus, since Finland gets most of its gas from Russia, concerns have risen “over sources of heat and light, especially with the long, cold Finnish winter on the horizon,” the BBC reports. Nonetheless, Finland’s state-owned gas and electricity companies confirmed that they will continue importing gas into the system through the Balticconnector entry point. The nation has plans to bring Finland’s sand battery technology to a larger, nationwide scale in the coming months, which may alleviate the heating expenses in the coming winter.

Bringing Finland’s sand battery in Kankaanpää to such a large scale would make a great difference but it would come with certain challenges. For example, due to the nature of the technology, Finnish researchers have yet to find a way to keep efficiency from falling whenever the “sand is used to just return power to the electricity grid.”

But, even with these obstacles, the storing of this green energy long-term represents a significant opportunity for Finland’s textile, food and pharmaceutical industries that traditionally rely on fossil fuels. Due to power stations operating for several hours during the coldest months of winter, heating is “extremely expensive,” said Elina Seppänen, an energy and climate specialist, to the BBC.

Finland’s sand battery could be the solution to the heating problem and provide a more flexible way of using and storing heat that “would help a lot in terms of expense” while contributing to Finland’s transition toward more renewable sources of gas and electricity.